A theme park or an amusement park is a place with attractions made up of rides, such as roller coasters and water rides. They usually contain a selection of different types of rides, along with shops, restaurants and other entertainment outlets. Theme parks can be enjoyed by adults, teenagers and children. 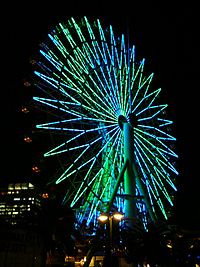 All content from Kiddle encyclopedia articles (including the article images and facts) can be freely used under Attribution-ShareAlike license, unless stated otherwise. Cite this article:
Theme park Facts for Kids. Kiddle Encyclopedia.