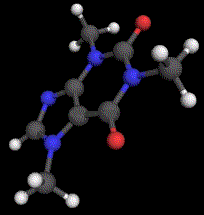 A caffeine molecule. Caffeine is a common drug

According to the WHO, a drug is a substance that can change how a living organism works. Food is usually not seen as a drug, even though some foods may have such properties. Most of the time drugs are taken to treat a disease, or other medical condition. An example for such drugs may be Aspirin or Paracetamol. These are usually given to treat fever, as well as certain infections. If such drugs are taken over a longer time, they are usually prescribed by a doctor. Other drugs are taken for fun, because of the effect they have. Some of these drugs taken for fun are better accepted by society than others. Having or taking certain drugs may be illegal, in certain countries.

Drugs may have other effects than those wanted. Such effects are generally known as side-effects.

Drugs act differently in different amounts. It is therefore important to take the right amount. The amount of the drug taken is called a dose. Aspirin is often prescribed against fever, or as an analgesic. One of the side-effects of Aspirin is that it makes the blood thinner. For this reason, it can also be used to prevent strokes, or heart attacks - in a much lower dose than the one used to treat fever, though.

Taking too much of a drug ("too high a dose") can cause sickness or even death. When a doctor says how much of a drug (the right dose) to take, only that amount should be taken. It is very important to keep taking the drug until the doctor says to stop because someone can feel better but still be sick. When a doctor says what drug to take, how much of it, and for how long, it is called a prescription. Drugs may cause addiction. Some drugs are illegal because they are very addictive. These drugs are really expensive, too. It can also be sold illegally from drug sellers which may cause serious results

Therapeutic drugs are also called medicinal drugs, medicine, or medication. Doctors will give therapeutic drugs to someone who is ill to make you better. You can buy these drugs at a pharmacy. Some drugs need a prescription to be bought, other drugs do not. Drugs that do not require a prescription are called "over the counter" medications. There are lots of these drugs for different illnesses. Some of these include:

All content from Kiddle encyclopedia articles (including the article images and facts) can be freely used under Attribution-ShareAlike license, unless stated otherwise. Cite this article:
Drug Facts for Kids. Kiddle Encyclopedia.