Greater New Haven is the metropolitan area whose extent includes those towns in the U.S. state of Connecticut that share an economic, social, political, and historical focus on the city of New Haven. It occupies the south-central portion of the state, in a radius around New Haven.

The region is known for its educational and economic connections to Yale University, oceanside recreation and the beach-community feel of the shoreline towns east of New Haven, and the trap rock landscapes stretching north from New Haven.

The New Haven metropolitan statistical area (MSA) is the set of municipalities containing the contiguous urbanized area centered on the city of New Haven. The MSA consists of the entirety of New Haven County with 27 towns. According to the U.S. Census Bureau, the New Haven MSA had a population of 861,113 in 2011. The New Haven MSA is also included in the wider region known as the New York Tri-State Area. 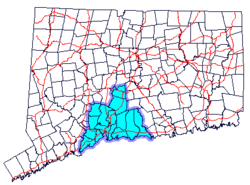 There are several official definitions of Greater New Haven. There are twelve towns that are included in all definitions. These are:

A service delivery area is a geographical area within which employment and training services are provided under the Job Training Partnership Act. This definition contains 14 towns and additionally includes the towns of Clinton and Woodbridge.

The South Central Region is an officially designated region of Connecticut administered by a regional council of governments. The regional council carries out land use, infrastructure, and long-term economic planning for the member towns. This definition contains 15 towns and includes the towns/cities of Meriden, Milford, and Woodbridge.

A labor market area, as defined by the U.S. Bureau of Labor Statistics, is an economically integrated area within which individuals can reside and find employment within a reasonable distance or can readily change employment without changing their place of residence. This definition contains 17 towns including the towns of Cheshire, Clinton, Killingworth, Meriden, and Woodbridge.

The New Haven NECTA is the set of towns containing the contiguous urbanized area centered on the city of New Haven, plus additional outlying towns that have a sufficient number of people commuting into the central towns. This definition includes 23 towns, adding the following ten towns: Chester, Cheshire, Clinton, Deep River, Durham, Essex, Killingworth, Meriden, Middlefield, Old Saybrook, and Westbrook. This definition includes a significant portion of the Lower Connecticut River Valley, which is not usually included in local definitions of Greater New Haven. As of the 2000 Census, the NECTA had a population of 571,310.

Shore Line East serves both New Haven stations plus Branford, Guilford, Madison, Clinton and Westbrook in the region, with service to Old Saybrook and New London as well as limited service to west of New Haven.

All content from Kiddle encyclopedia articles (including the article images and facts) can be freely used under Attribution-ShareAlike license, unless stated otherwise. Cite this article:
Greater New Haven Facts for Kids. Kiddle Encyclopedia.