North Haven is a town in New Haven County, Connecticut on the outskirts of New Haven, Connecticut. As of the 2010 census, it had a population of 24,093.

North Haven is less than 10 miles (16 km) from downtown New Haven and Yale University. It is near Sleeping Giant State Park and is home of the Quinnipiac University School of Health Sciences, the School of Nursing, School of Law, School of Education, and School of Medicine on Bassett Road North Haven has easy access to Interstate 91 and the Wilbur Cross Parkway (Route 15).

In July 2007, Money magazine ranked North Haven as the eighty-sixth "best place to live" in the United States. 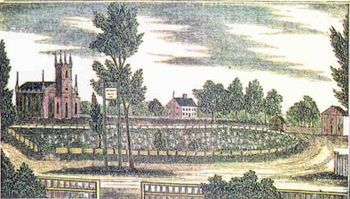 In his will of 1714, the Reverend James Pierpont (1659–1714) of New Haven gave 8 acres (32,000 m2) to his neighbors in the Northeast Parish, as North Haven was called, "provided those neighbors will set their meeting house there and make their training and burying there."

The first meeting house, completed in 1722, stood on the Green, west of what is now known as the Old Center Cemetery. About half of the original Pierpont gift remains today as the North Haven Green.

Ezra Stiles enumerated about forty families living in North Haven in the early part of the eighteenth century. All of these people were multipurpose farmers, producing what they needed for themselves and their families. In 1786, the General Assembly permitted North Haven to incorporate as a town, separate from New Haven. New roads were built to facilitate communication, namely the Hartford Turnpike in 1798 and the Middletown Turnpike in 1813.

The first United States census counted 1,236 people in the agricultural community of North Haven in 1790. However, the 1789 Grand List had found 1,620 sheep in North Haven, with the sheep outnumbering the residents.

By the middle of the nineteenth century, signs of the Industrial Revolution were apparent. In 1838, the New Haven and Hartford Railroad had laid its tracks along the level sand plains by the Quinnipiac River. In addition, small industries such as the manufacture of agricultural implements in Clintonville began in 1830. On the 1850 census, 62% of the population were listed as farmers. One third of the residents worked in various nonagricultural occupations such as mechanics, brickmakers, and shoemakers.

After the Civil War, the expanding production of bricks, especially by the I.L. Stiles Co., brought immigrants to North Haven from Ireland, Germany, Italy, and Poland. By 1880, 11 out of 100 people had been born outside of the United States. 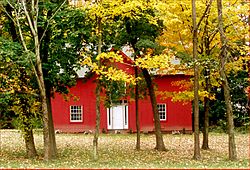 Storage barn on Dixwell Avenue, near the Hamden border.

By 1900, public transportation was important to North Haven residents. Eighteen passenger trains stopped at the Broadway station every day. The Airline Railroad ran through Montowese and Clintonville to Middletown. Trolleys ran from Montowese to New Haven. After 1900, the line was extended north to Wallingford.

After World War I, the automobile changed life in this country town. The brickyards along the river were the major industry. However, residents who owned a car could live in North Haven and commute to New Haven for their jobs. Small real estate development began to grow up along the southern edge of town.

Significant population growth occurred at the end of World War II. North Haven's population increased rapidly, quadrupling between 1945 and 1970. The establishment of two factories, Pratt & Whitney and Marlin Firearms, spurred the subsequent population increase. This population shift necessitated the building of a new police station, firehouse, library, and five schools in the 1950s and 1960s to accommodate the needs of the growing community. The town continues to grow and expand until this day.

In spite of its rapid growth throughout the past few decades, however, this New England town still retains its town meeting form of government.

There were 8,597 households out of which 31.0% had children under the age of 18 living with them, 64.2% were married couples living together, 8.1% had a female householder with no husband present, and 24.5% were non-families. 21.0% of all households were made up of individuals and 10.9% had someone living alone who was 65 years of age or older. The average household size was 2.65 and the average family size was 3.10.

All content from Kiddle encyclopedia articles (including the article images and facts) can be freely used under Attribution-ShareAlike license, unless stated otherwise. Cite this article:
North Haven, Connecticut Facts for Kids. Kiddle Encyclopedia.