Wallingford is a town in New Haven County, Connecticut, United States centrally located between New Haven and Hartford, and Boston and New York City. The population was 45,135 at the 2010 census. The community was named after Wallingford, in England.

The Connecticut General Assembly created the town on October 10, 1667. This original plot of land near the Quinnipiac River is now considered Main Street. Starting on May 12, 1670 there were 126 people who lived in temporary housing, and five years later in 1675 there were 40 permanent homes.

In 1697 Wallingford was the site of the last witchcraft trial in New England. Winifred Benham was thrice tried for witchcraft and acquitted all three times.

Wallingford has diversified its commercial and industrial base over the past decade attracting high-technology industries as compared to traditional heavy manufacturing. It is the home of a large variety of industries and major corporations spanning the spectrum of the medical, health care, service, high-tech specialty metal manufacturing and research development. The development of the Barnes Industrial Park, Casimir Pulaski Industrial Park, Wharton Brook Industrial Park, and the South Turnpike Road area have greatly contributed to this transition. The Bristol-Myers Squibb Company, the town’s largest taxpayer, has established a research and development facility in Wallingford’s MedWay Industrial Park. An Interchange Zone which permits very restrictive commercial development of office parks, research and development centers and hotels has been created at the intersection of Interstate 91 and Route 68.

In terms of Wallingford's manufacturing and design history, silver-producing companies like Simpson, Hall, Miller & Co. and R. Wallace & Sons are of particular note. Simpson, Hall, Miller & Co. as well as Wallingford's Watrous Manufacturing later became part of the International Silver Company, which was headquartered in the neighboring city of Meriden.

There were 18,518 households, out of which 64% were married couples living together, 12% had a female householder with no husband present, and 18% were non-families. The average household size was 2.4. 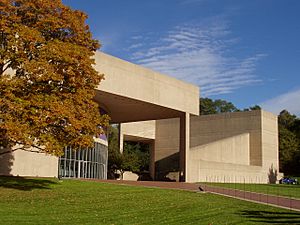 Ten buildings and districts in Wallingford are listed on the National Register of Historic Places:

Top employers in Wallingford according to the town's 2020 Comprehensive Annual Financial Report:

From 1943 to 1944 the Boston Braves held spring training in Wallingford at Choate's Winter Exercise Building. The town is the home of the Connecticut Bearcats, a New England Football League team.

Wallingford is also located on the New Haven–Springfield Line with daily passenger service to points north and south and to New York City via a connection in New Haven. It is served by the CTrail Hartford Line (consisting of Connecticut Department of Transportation and Amtrak trains) and by Amtrak's Northeast Regional, and Valley Flyer.

All content from Kiddle encyclopedia articles (including the article images and facts) can be freely used under Attribution-ShareAlike license, unless stated otherwise. Cite this article:
Wallingford, Connecticut Facts for Kids. Kiddle Encyclopedia.