Wallingford is a train station on the New Haven–Springfield Line located in Wallingford, Connecticut. It is served by the CTrail Hartford Line (consisting of Connecticut Department of Transportation and Amtrak trains) and by Amtrak's Northeast Regional, and Valley Flyer. A new station with high-level platforms opened on November 6, 2017 to the north of the original station. The former station building is listed on the National Register of Historic Places as Wallingford Railroad Station. 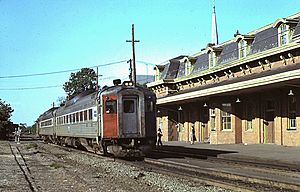 An Amtrak train at Wallingford in 1980

The depot at Wallingford was built in 1871 by the Hartford & New Haven Railroad on the Springfield Line, and was built in a French Second Empire style similar to that of the Windsor train station. 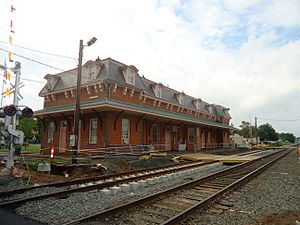 In fall 2016, the Wallingford Planning and Zoning Commission adopted a Transit-Oriented Development Plan, which outlined recommendations for development and infrastructure changes around the station. The existing commercial, industrial zone near the station, as part of the plan, will be replaced with medium- and high-density residential zoning. New commercial and residential development will be encouraged near the station and improvements will be made in the area of the station to connect to downtown Wallingford.

Wallingford has two high-level side platforms serving both tracks, each 6 cars long. The new station, which cost about $21 million to construct, opened on November 6, 2017.

Amtrak's Vermonter stopped serving the Berlin and Wallingford stations on June 9, 2018 due to the addition of Hartford Line service by Amtrak and the Connecticut Department of Transportation.

All content from Kiddle encyclopedia articles (including the article images and facts) can be freely used under Attribution-ShareAlike license, unless stated otherwise. Cite this article:
Wallingford station (Connecticut) Facts for Kids. Kiddle Encyclopedia.