Madison is a town in the southeastern corner of New Haven County, Connecticut, United States, occupying a central location on Connecticut's Long Island Sound shoreline. The population was 18,269 at the 2010 census.

Madison was first settled in 1641. Throughout the 18th century, Madison was known as East Guilford until it was incorporated as a town in 1826. Since then, Madison and Guilford have shared many cultural and economic similarities despite an unofficial high school rivalry.

Bill Clinton favorably mentions the town in his autobiography, My Life.

Hammonasset Beach State Park possesses the state's longest public beach, with campsites, picnic areas, and a fishing pier, and is extremely popular in the summer, causing traffic jams on I-95 on peak days.

Surf Club Beach is the town's major public beach with lifeguards and recreational facilities for baseball, softball, basketball, volleyball, and horseshoes. It features playgrounds for children and picnic tables for families, as well as sailboat and kayak racks. It is also home to several athletic fields, including Strong Field, the town's multi-purpose athletic complex.

East Wharf, sometimes referred to as the "purple sand beach," has lifeguards, a pier, kayak and sailboat racks in addition to a gazebo.

West Wharf has a pier, rock formations to the west, a small sunbathing beach and boat spaces.

The Madison Beach Club has its own beach and is located near Madison Country Club, a private golf course.

Madison's center of town is the main area for businesses and the location of the town library and Madison Green Historic District. Madison Center is a census-designated place, with a population of 2,290 at the 2010 census. The center has many boutiques and eateries. Although it is called "the center," it is not the geographic center of Madison, but is located in the southern part of town, halfway between Clinton and Guilford. 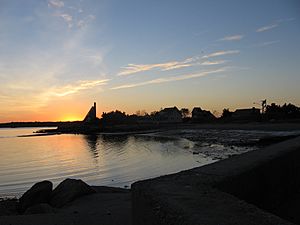 The beach at sunset

There were 6,515 households, out of which 39.1% had children under the age of 18 living with them, 69.8% were married couples living together, 6.6% had a female householder with no husband present, and 21.4% were non-families. 18.5% of all households were made up of individuals and 8.5% had someone living alone who was 65 years of age or older. The average household size was 2.72 and the average family size was 3.12.

The Madison train station is served by the Shore Line East commuter railroad, with service to New Haven's Union Station to the west and the Old Saybrook train station to the east, facilitating connections to the MTA's Metro-North Railroad and to Amtrak's Northeast Regional and Acela Express services. Similarly, the Estuary Transit District provides public transportation between Madison Center and Old Saybrook along U.S. Route 1 through its "9 Town Transit" service, and the Connecticut Transit "S" bus travels between Madison Center and New Haven.

Major roads in Madison include Interstate 95, U.S. Route 1, and state highway Routes 79 and 80.

In 1935–1942, Madison served as the site of Camp Hadley, one of 23 Civilian Conservation Corps (CCC) camps in Connecticut. In the winter of 2013, Daniel Hand High School math teacher and 'Woodsy Club' advisor Jason Engelhardt led an iniatiative to clean and preserve the site. 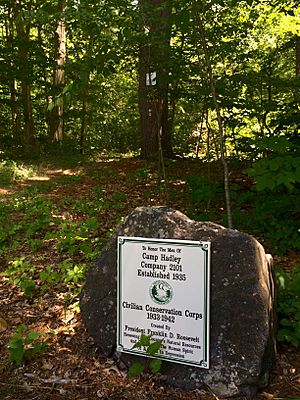 All content from Kiddle encyclopedia articles (including the article images and facts) can be freely used under Attribution-ShareAlike license, unless stated otherwise. Cite this article:
Madison, Connecticut Facts for Kids. Kiddle Encyclopedia.