Clinton is a town in Middlesex County, Connecticut, United States. The population of the town was 13,185 at the 2020 census. The town center along the shore line was listed as a census-designated place (CDP) by the U.S. Census Bureau in the 2020 census.

Clinton is bordered by the towns of Madison on the west, Westbrook on the east, and Killingworth on the north. Clinton is directly off Long Island Sound. The town has one town beach named Clinton Beach. Many fishers come to Clinton to catch bluefish. The annual Bluefish Festival is held in Clinton in summer.

The town center is known as Clinton Center. It is the location of the Clinton Village Historic District, which is listed on the National Register of Historic Places. 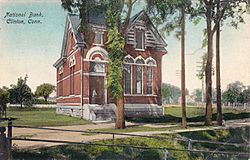 National Bank in Clinton, about 1908

Clinton traces its history from 1663 when the land between Guilford and Saybrook, as they were then bounded, was known as Hammonasset. In this year a committee was appointed by the General Court at Hartford to lay out this area as a plantation. In 1667 the settlement was designated a town and named Kenilworth. By the middle of the eighteenth century, through changes in use, this name became Killingworth. In 1838 the southern portion was incorporated by the General Assembly as the Town of Clinton, the northern portion retaining the name of Killingworth. The town was named after New York Governor DeWitt Clinton. The line marking the division between the towns of Killingworth and Clinton was the same as that which divided the first and second ecclesiastical societies or, as they were later known, "school societies," which were established in 1735.

As in most small New England shore towns, life centered about fishing, farming, shipbuilding, and the church. One of the early leaders of Clinton's church was Abraham Pierson. In 1701, when the General Court of the Colony in Hartford granted a charter for "the founding of a collegiate school within His Majesty's Colony of Connecticut," its founders chose Pierson as its rector. The first classes were held in his parsonage in Clinton. In later years the school was moved to Saybrook and then to New Haven, where it eventually became Yale University. A story titled "The Birth of Yale" can be found at the town's website and was authored by Clinton resident Peggy Adler.

In the 20th century, Clinton prospered as a suburban bedroom community of New Haven.

The Estuary Transit District provides public transportation throughout Clinton and the surrounding towns through its 9 Town Transit Service. Services include connections to the Old Saybrook Train Station, served by Amtrak and Shoreline East railroads.

The Henry Carter Hull Library is located at 10 Killingworth Turnpike. The library features over 10,000 movie titles, over 80,000 books, 15 public computers, a convenient location, free wi-fi, lots of seating areas, and a welcoming and friendly staff. At 20-A Killingworth Turnpike is Clinton Crossing Premium Outlets, a Simon Center shopping outlet, offering designer and fashion-brand outlets for local and international shoppers.

Clinton is known as the bluefish capital of the world.

All content from Kiddle encyclopedia articles (including the article images and facts) can be freely used under Attribution-ShareAlike license, unless stated otherwise. Cite this article:
Clinton, Connecticut Facts for Kids. Kiddle Encyclopedia.