Middlefield is a town in Middlesex County, Connecticut, United States. The population was 4,425 at the 2010 census. The town includes the village of Rockfall in the northeast section.

Middlefield, in Middlesex County, is so named because it is halfway between Middletown and Durham, and Middletown and Meriden. For such a small community, Middlefield has an abundance of wonderful history that goes back to the late 17th century and many first settlers of Connecticut. The Old North Burying Ground was established for those living west of Middletown and the first burial was in 1738.

Middlefield became a Town in 1866 by an act of the Connecticut Legislature. The town was previously part of the City of Middletown.

Middlesex County was created on May 2, 1785 from Hartford and New Haven counties. The county was named for Middlesex, England. Middlesex County is in south-central Connecticut. It is bordered to the south by Long Island Sound and to the southwest by the Hammonasset River, and the Connecticut River bisects the county from north to south. Other waterways are the Menunketesuck River, the Moodus Reservoir, and Bashan Lake. The topography is mostly upland terrain, with river valleys and coastal lowlands. Parklands include Cockaponset State Forest, Meshomasic State Forest Preserve, and Hurd and Devil's Hopyard state parks.

The Western Nehantic Indians inhabited the area when John Winthrop the Younger established the Puritan settlement of Saybrook in the 1630s. Later renamed Old Saybrook, it was where David Bushnell invented and built the Turtle (1775), a submarine used during the American Revolution. The county was formed in 1785 and named for Middlesex, England. Essex, a center of shipbuilding from the 1720s to the 1840s, was raided during the War of 1812. There is no county seat because the state abolished county government in 1960. The largest city is Middletown, home of Wesleyan University (founded 1831).

The west side of Middlefield is flanked by the Metacomet Ridge, a mountainous trap rock ridgeline that stretches from Long Island Sound to nearly the Vermont border. Notable mountains of the Metacomet Ridge in Middlefield include Higby Mountain and Besek Mountain. The 50 mile Mattabesett Trail traverses the ridge. The Nature Conservancy manages the summit and ledges of Higby Mountain.

Middlefield offers many seasonal activities. Residents can also go ice-skating on one of the many ponds located at the edge of Peckham Park. In the summer Peckham Park has little league baseball games going on almost everyday of the week. The smaller kids can play on the jungle gym or play basketball and soccer. Some other summer activities could be golfing on one of the two local golf courses or go to the beach located on Lake Beseck just off of Route 147. Residents can also enjoy picking fruit, playing golf, shopping, and eating at Lyman Orchards. Middlefield is also home to the Powder Ridge Ski Area. 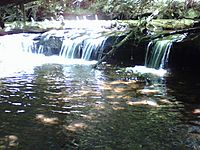 All content from Kiddle encyclopedia articles (including the article images and facts) can be freely used under Attribution-ShareAlike license, unless stated otherwise. Cite this article:
Middlefield, Connecticut Facts for Kids. Kiddle Encyclopedia.