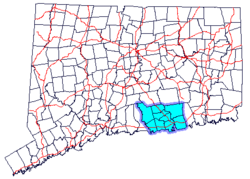 The Lower Connecticut River Valley is a region of the state of Connecticut focused around the juncture where the Connecticut River meets Long Island Sound. It includes towns in Middlesex County and the western edge of New London County. It is located in the southeastern-central part of the state and includes the seventeen towns of Chester, Clinton, Cromwell, Deep River, Durham, East Haddam, East Hampton, Essex, Haddam, Killingworth, Lyme, Middlefield, Middletown, Old Lyme, Old Saybrook, Portland and Westbrook.

The oldest archeological founds in the area have been dated back to circa 8000 BC (as of January 1984).

All content from Kiddle encyclopedia articles (including the article images and facts) can be freely used under Attribution-ShareAlike license, unless stated otherwise. Cite this article:
Lower Connecticut River Valley Facts for Kids. Kiddle Encyclopedia.