Deep River is a town in Middlesex County, Connecticut. The population was 4,415 at the 2020 census. The town center is designated by the U.S. Census Bureau as a census-designated place (CDP). Deep River is part of what the locals call the "Tri-town Area", made up of the towns of Deep River, Chester, and Essex.

Saybrook Colony formally joined Connecticut in 1644. The portion of the original colony east of the Connecticut River was set off as a separate town in 1665. The site of the present village of Deep River was said to have been owned by John, Nathaniel, and Philip Kirtland in 1723. The village of Winthrop was said to have been settled by Baptists as early as 1729. In the early to mid-19th century, various portions of Saybrook broke off as separate towns, starting from Chester in 1836 to Old Saybrook in 1854. In 1947, the town of Saybrook changed its name to "Deep River", matching the name of the town center village.

From 1961 until 1996, Deep River Convalescent Home was in operation on West Elm Street in Deep River.

First Selectman Richard "Smitty" Smith, who had been in office since 1989, died of a heart attack on March 25, 2016. He was serving his 13th term (Over 26 years) as the Town's First Selectman when he died. He was subsequently replaced as First Selectman by Angus McDonald Jr, who had previously served at Second Selectman. 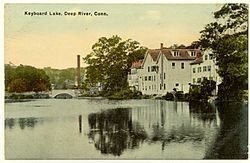 Keyboard Lake, from an early postcard

Saybrook Colony, along the mouth of the Connecticut River, was one of the early settlements in the area. Several towns broke off and incorporated separately over the course of time. The towns which were created from parts of Saybrook Colony are listed below.

From 1840 to around 1940, the U.S. was the world's biggest buyer of ivory and most of that ivory went to Deep River. Phineas Pratt developed an ivory lathe and eventually Deep River became known as "the queen of the valley" due to wealth from the ivory industry. The rival Comstock, Cheney & Company was established in nearby Ivoryton in the 1860s.

These sites in town are on the National Register of Historic Places:

There were 1,824 households, out of which 30.2% had children under the age of 18 living with them, 56.6% were married couples living together, 9.1% had a female householder with no husband present, and 30.8% were non-families. 24.0% of all households were made up of individuals, and 8.7% had someone living alone who was 65 years of age or older. The average household size was 2.46 and the average family size was 2.93.

The Estuary Transit District provides public transportation throughout Deep River and the surrounding towns through its 9 Town Transit Service. Services include connections to the Old Saybrook Train Station, served by Amtrak and Shoreline East railroads.

The towns of Deep River, Chester, and Essex make up Regional School District #4. Deep River is home to Deep River Elementary School, serving grades K-6. John Winthrop Middle School and Valley Regional High School, serve students for grades 7-8 and 9-12, and are located on Warsaw Street and Kelsey Hill Road, respectively. Additionally, the Connecticut Transition Academy at Mount Saint John which serves students for grades from elementary to high school which is located on Kirtland Street and across the river from Gillette Castle State Park, respectively.

All content from Kiddle encyclopedia articles (including the article images and facts) can be freely used under Attribution-ShareAlike license, unless stated otherwise. Cite this article:
Deep River, Connecticut Facts for Kids. Kiddle Encyclopedia.