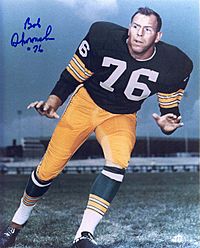 Robert Francis "Bob" Skoronski (March 5, 1934 – October 30, 2018) was a former American football player. He was an tackle in the National Football League for the Green Bay Packers for eleven seasons in 1956 and again from 1959 to 1968. He was born in Ansonia, Connecticut.

Skoronski died on October 30, 2018 of Alzheimer's disease in a suburb near Madison, Wisconsin at the age of 84.

All content from Kiddle encyclopedia articles (including the article images and facts) can be freely used under Attribution-ShareAlike license, unless stated otherwise. Cite this article:
Bob Skoronski Facts for Kids. Kiddle Encyclopedia.