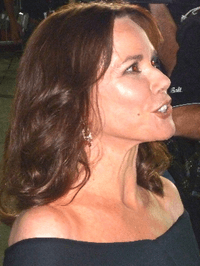 Barbara Lynn Herzstein (b. February 5, 1948), better known as Barbara Hershey, is an American movie and television actress. She has starred in many movies and television series. Her acting career began around 1965, but she did not get famous until the second half of the 1980s. She was born in Hollywood, California.

She won the Golden Globe Award in 1991 for "Best Performance by an Actress in a Mini-Series or Motion Picture Made for TV". She was also in Black Swan, The Last Temptation of Christ and Hannah and Her Sisters.

All content from Kiddle encyclopedia articles (including the article images and facts) can be freely used under Attribution-ShareAlike license, unless stated otherwise. Cite this article:
Barbara Hershey Facts for Kids. Kiddle Encyclopedia.