Southbury is a town in western New Haven County, Connecticut, United States. Southbury is north of Oxford and Newtown, and east of Brookfield. Its population was 19,904 at the 2010 census.

Southbury comprises sprawling rural country areas, suburban neighborhoods, and historic districts. It is a short distance from major business and commercial centers, and is within 80 miles (130 km) of New York City and 40 miles (64 km) of Hartford; the latter the capital of Connecticut.

Southbury is the only community in the country with the name "Southbury", which is why the town seal reads Unica Unaque, meaning "The One and Only." 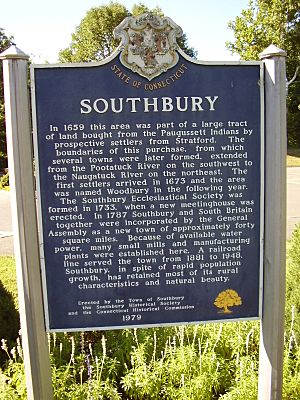 In the 1800s, water power became essential to the growth of Southbury's industries, which included mills, tanneries, and distilleries. The power for these industries came primarily from the Pomperaug River and the Housatonic River. As the industrial revolution progressed, many of these businesses left for Waterbury.

In the 1920s, Russian expatriates Count Ilya Tolstoy (son of author Leo Tolstoy) and George Grebentschikoff founded an artists' colony at one end of Main Street, known as Churaevka (or "Russian Village"). At its peak, Churaevka had a printing press used by Russian and Ukrainian scholars and novelists. Visitors to the colony included the composer Sergei Rachmaninoff. Most of its immigrant population is now gone; however, St. Sergius Chapel, designed by Nicholas Roerich and built in 1932-1933, remains. Churaevka is listed on the National Register of Historic Places.

In November 1937 residents of the farming outpost got word that a man by the name of Wolfgang Jung had purchased 178 acres (0.72 km2) in the town. Residents looking into his plans discovered that he was a member of the German American Bund, an organization of ethnic Germans living in the United States who supported Adolf Hitler and Nazi Germany. Its leader, Fritz Kuhn, was considered the leading anti-Semite in the country. Word soon got out that they were in fact planning to build their largest training facility in the country. Residents objected by calling a town meeting and set up a zoning department with one simple rule, no military activity excluding the United States Army. The law was adopted December 14 and the Bund stopped work and eventually sold the land. In 2012 a documentary was created entitled 'Home of the Brave: When Southbury Said No to the Nazi s'

Southbury was a rural farming town for most of its history. However, with the development of the Interstate Highway System, that changed. With the opening of Interstate 84 through Southbury by 1963, the town gained easy access to New York and Hartford, also improving its access to Danbury and Waterbury. Heritage Village opened in 1967, on a 1,000-acre (4.0 km2) site. In 1987, IBM built an extensive office and research building in Southbury, employing over 2,500 workers. Southbury was no longer a small, rural town. Today, Southbury has approximately 17% open space, with a goal of 20%.

In the early 1990s, Southbury was the subject of a lawsuit by the Golden Hill Paugussett Indian Nation. The 100-member tribe sought to take the land of roughly 1,200 property holders in the town. The lawsuit was thrown out in 1993 based on the fact that the man who brought the suit was not a chieftain, contrary to his claims, and had no standing to bring the suit.

Towns that border Southbury are Middlebury to the northeast, Oxford to the east and southeast, Newtown to the southwest, Bridgewater to the west, and Roxbury and Woodbury to the north.

South Britain and Southford are included in the incorporated township of Southbury.

By 2013, about 30% of the population of Southbury is expected to be 60 years of age or older. By 2020, about 40% will be 60 or older. Southbury has developed a three-phase plan to increase services for the aging population. The former Southbury Library was converted into a senior center; it also houses the new home of the area Parks & Recreations Department.

The Southbury Parks & Recreations Department moved into the old Southbury Library in 2007. Southbury town sports include:

Controversy has arisen over town sports since the Parks and Recreation department began enforcing a policy banning out-of-town players from participating in town-sanctioned sports in 2006. This policy stems from the fact of overcrowding at town fields, a problem which is plaguing Southbury. 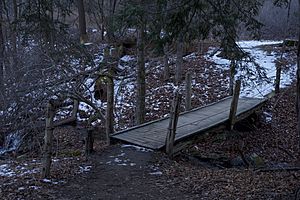 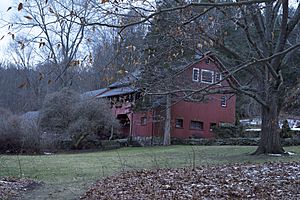 Audubon Center Bent of the River 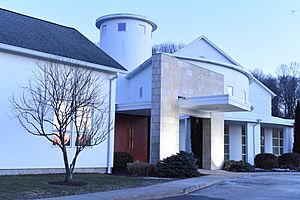 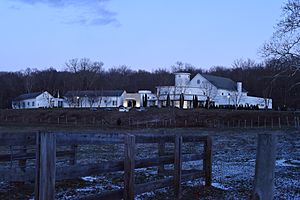 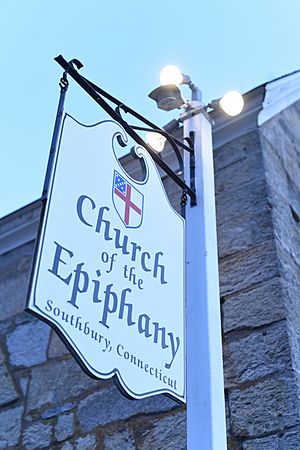 Church of the Epiphany

The Southbury Public Library is a department of the town, with its own 9-member Board of Directors. On May 1, 2006 Southbury officially opened its new library (its 3rd, though no two have ever been in use concurrently) at 100 Poverty Road. This $6 million project was the first public building constructed in Southbury in 30 years. It is a 32,000-square-foot (3,000 m2), 2 floor, state-of-the-art facility. It contains around 90,000 books. It has computers, audiobooks, DVDs, recording rooms for recording books for the blind, meeting rooms, internet, a fireplace and a coffee bar. Selections recorded for the blind at the Southbury Public Library become part of the National Library Service catalog.

Planning for the library began in 1998, with an original projected bond issue of $7.35m. The planning committee solicited donations from the public, which resulted in two single donations of $100,000 or more, and five more of between $25,000 and $99,000, in addition to smaller donations.

The old library building, at 561 Main Street South, has been converted to hold offices for the Parks and Recreation department, as well as a new senior center. The old library was built in 1969, and expanded in 1979.

The oldest library building was located in South Britain (a section and Historic District of Southbury) and was replaced in 1969. It was built in 1904 and contained approximately 1,000 volumes.

The Shepaug Dam on the Housatonic River is part of a hydroelectric power plant, operated by FirstLight Power Resources, capable of a peak power output of 42,600 kW. This dam is a popular nesting and feeding ground for wintering eagles and hawks, including bald eagles. Near the power station, FirstLight also operates an eagle observation area first opened by the utility's predecessor, Northeast Utilities, in the mid-1980s. Access is free, and some telescopes are provided. Utility company employees and volunteers from the Connecticut Audubon Society and other groups are at the observation area to assist visitors. Advanced reservations are required. Eagles are attracted to the spot because the water churning through the dam's hydroelectric turbine keeps the surface from icing over, allowing the birds to fish. Red-tailed hawks, goshawks, great blue herons and other waterfowl are also attracted to the spot. The dam flooded an area now known as Lake Lillinonah.

FirstLight Power Resources has submitted a plan to the Connecticut Department of Public Utility Control to build a new peak-power plant next to the existing hydroelectric facility. 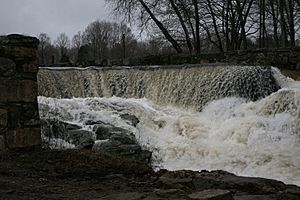 The Southbury Volunteer Firemen's Association, Inc. is a private, member governed corporation, operating as a non-profit organization and is chartered for the purpose of providing emergency service to the community. Serving a rural territory which includes several miles of Interstate 84, single family homes, industrial, heavy commercial, institutional, and some multi-family occupancies. Founded in 1932, they operate out of 4 facilities, with 16 specialty fire vehicles, and 107 department members. They provide services including Fire Suppression, Motor Vehicle Extrication, Operations level HAZMAT, Confined Space and Water Rescue to the community.

The Southbury Ambulance Association was started as a volunteer organization in 1953 by the Southbury Lions Club, handling both Southbury and Woodbury. The SAA had some of the first EMT's in the state in the 1970s. Until 1978, only SLC members were allowed to join the SAA, which caused difficulties in finding sufficient crew for the ambulance service. As of 1997, the SAA was responding to more than 1,500 service calls a year. Today, the SAA still operates as a volunteer organization which receives zero funding from the town. It currently operates three ambulances.

The Southbury Land Trust is a "private nonprofit conservation organization dedicated to the protection and preservation of Southbury Connecticut's natural resources for the enjoyment and benefit of all present and future generations." Basically, the SLT purchases or is gifted with land which it places development restrictions on. They currently control more than 800 acres (3.2 km2) of land in Southbury. Much of this land is open to the public. 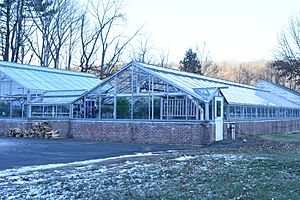 Southbury is part of the Pomperaug Regional School District, region 15, a school system that includes the towns of Southbury and Middlebury. The system contains four elementary, two middle and one high school.

There has been a debate between the two towns over the amount each pays towards the system.

Schools located in Southbury include:

Students from Region 15 also have the option to attend:

Only a small area of Southbury is covered by water or sewer systems, with the vast majority left to wells and septic. Southbury is generally concerned with its water table, to the point where the only car wash in town is required to recycle all of their water used, an expensive process.

All content from Kiddle encyclopedia articles (including the article images and facts) can be freely used under Attribution-ShareAlike license, unless stated otherwise. Cite this article:
Southbury, Connecticut Facts for Kids. Kiddle Encyclopedia.