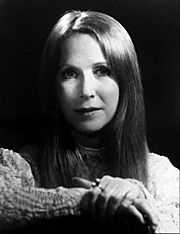 Julia Ann "Julie" Harris (December 2, 1925 – August 24, 2013) was an American actress. She won five Tony Awards, three Emmy Awards and a Grammy Award, and was nominated for an Academy Award.

In 1994, she was awarded the National Medal of Arts. She was a member of the American Theatre Hall of Fame and received the 2002 Special Lifetime Achievement Tony Award.

Harris was born on December 2, 1925 in Grosse Pointe, Michigan. She studied at University Liggett School. Harris was raised in Chatham, Massachusetts.

Harris died on August 24, 2013 in her home in West Chatham, Massachusetts from congestive heart failure, aged 87.

All content from Kiddle encyclopedia articles (including the article images and facts) can be freely used under Attribution-ShareAlike license, unless stated otherwise. Cite this article:
Julie Harris Facts for Kids. Kiddle Encyclopedia.