Kids Encyclopedia Facts
This page is about the incorporated city of Grosse Pointe. For the adjacent group of cities, see Grosse Pointe. 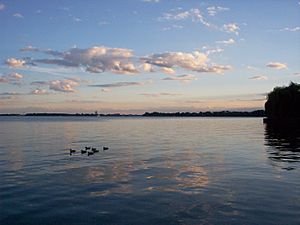 The street layout of Grosse Pointe is basically a grid inside of its Cadieux, Mack, and Fisher Road boundaries. Inside this small rectangle, most blocks contain rows of single-family homes built between 1910 and 1950, on parcels 50 feet (15 m) wide on average. Some streets offer large backyards, such as Washington and Lakeland, while other streets are more compact. In some areas homes are configured in a traditionally urban, close-together fashion, while other nearby blocks may offer yards up to 150 feet (46 m) wide.

Home sizes and styles vary widely, from 1,500 to 12,000 square feet (100 to 1,100 m2), but slightly under 3,000 square feet (300 m2) on average. Most of the largest homes are within a few blocks of the lakefront; there are several blocks of mansions south of Kercheval Avenue. Predominant architecture includes the neo-Georgian, Tudor revival, Dutch Colonial, and arts and crafts styles. Some Victorian homes and traditional bungalow homes can also be found, mostly just north and south of the Village retail district. Some blocks, generally just south of the Village, have townhouses and apartments. Most of these were built in the 1920s, and can be seen along St. Paul, Maumee, and Jefferson avenues, mostly west of Rivard Boulevard, and between Notre Dame and Cadieux south of the Village retail district.

There are retail and low-rise office buildings along Kercheval Avenue in the Village district, on Fisher Road near Grosse Pointe South High School, and along Mack Avenue bordering Detroit. 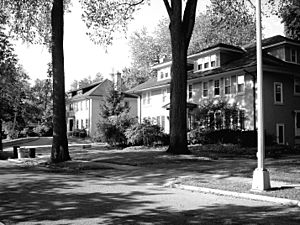 There were 2,236 households of which 33.0% had children under the age of 18 living with them, 54.9% were married couples living together, 8.9% had a female householder with no husband present, 2.4% had a male householder with no wife present, and 33.8% were non-families. 30.2% of all households were made up of individuals and 14% had someone living alone who was 65 years of age or older. The average household size was 2.42 and the average family size was 3.06.

There were 2,388 households out of which 30.8% had children under the age of 18 living with them, 56.7% were married couples living together, 7.1% had a female householder with no husband present, and 34.7% were non-families. 31.1% of all households were made up of individuals and 13.8% had someone living alone who was 65 years of age or older. The average household size was 2.37 and the average family size was 3.02.

The City's Master Plan permits additional growth in downtown Grosse Pointe, also known as "The Village", allowing an expansion of the shopping- and amenities-focused district. In particular, two lots (on either side of St. Clair Avenue) currently used for municipal parking directly north of the current row of retail are the focus of planned development.

The former Jacobson's Department Store building along Kercheval, west of St. Clair, has been completely redeveloped. Upper-floor office space accompanies a slate of new retailers, including a Trader Joe's grocery occupying specialized space in the renovated building. In addition, a new building rose in 2011 to replace the former Kroger grocery store at the corner of Kercheval and Notre Dame Street.

All content from Kiddle encyclopedia articles (including the article images and facts) can be freely used under Attribution-ShareAlike license, unless stated otherwise. Cite this article:
Grosse Pointe, Michigan Facts for Kids. Kiddle Encyclopedia.