Kids Encyclopedia Facts
This page is about the incorporated city of Grosse Pointe Park. For the adjacent area, see Grosse Pointe.

Grosse Pointe Park is a city in Wayne County in the U.S. state of Michigan. The population was 11,555 at the 2010 census. Bordering on Detroit with frontage on southern Lake Saint Clair, it is the westernmost of the noted Grosse Pointe suburbs, with the oldest overall housing stock of the five cities. Grosse Pointe Park is 6 miles (9.7 km) east of downtown Detroit and thus is home to many who commute to the city on a daily basis. The area is often referred to simply as 'GPP' or "The Park". Many locals call the area from Alter Road to Nottingham in between Jefferson Avenue and Mack Avenue the Cabbage Patch, due to how the duplex style houses are closer together than the rest of the city.

In 2014 the city placed a farmer's market on Kercheval Street, on the border with Detroit. Mayor of Detroit Mike Duggan criticized the placement because it was blocking a street between Detroit and Grosse Pointe Park. Grosse Pointe Park officials moved parts of the market to another location but still had it partly blocking Kercheval. In 2015 the city added large planters at the intersection of Kercheval Avenue and Alter Road, on its border with Detroit. The city government stated that it is a beautification project.

According to the United States Census Bureau, the city has a total area of 3.71 square miles (9.61 km2), of which 2.17 square miles (5.62 km2) is land and 1.54 square miles (3.99 km2) is water. The water is part of Lake St. Clair. Grosse Pointe Park has about 3.5 miles (5.6 km) of borders with Detroit, with one border between Alter Road and Wayburn to the southwest, and another along Mack Avenue to the northwest; its third border on land is with the city of Grosse Pointe along Cadieux Road to the northeast. 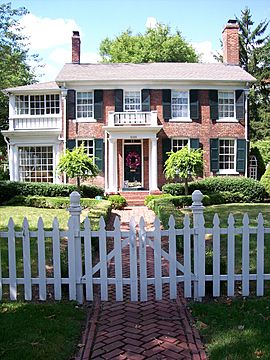 The Buck-Wardwell House on Jefferson Avenue, built in 1840, as the first brick house in Grosse Pointe

The neighborhoods in Grosse Pointe Park are built on a standard grid street pattern which flows out of Detroit, and housing ranges from tightly-packed single- and multi-family brick houses, often rentals, on the far west side of the Park, to rows of traditionally-styled single family homes generally averaging over 3,000 square feet (280 m2), to multimillion-dollar mansions, some of which are found on the lakeshore. The west side of the city features mixed-use neighborhoods, where retail, schools, and churches are within close walking distance. The rest of the city is basically residential, but at the eastern edge residents are in close walking distance to "the Village" shopping district in Grosse Pointe. Many of the houses in the Park were built prior to World War II, and many of these were designed by noted architects using the finest materials. Windmill Pointe Drive, and streets such as Bishop, Kensington, Yorkshire, Edgemont Park, Three Mile Drive, Devonshire, Buckingham, Berkshire, Balfour, Middlesex, and Nottingham among others, each have dozens of large, architecturally significant homes. These mansions and mini-manses were often placed on large lots which were often split up, the result being that some post-war ranch style homes are mixed in with homes of traditional design.

Grosse Pointe Park includes a large neighborhood located on Windmill Pointe, a once-swampy piece of land roughly south of Jefferson Avenue, the edge of which marks the entrance to the Detroit River and the end of Lake St. Clair. A large lakefront park with a pool, gym, movie theatre, and gathering spaces for residents only is found at this spot. At the base of the point, at the foot of Three Mile Drive, is another large park, Patterson Park, which is known for its skating rink and walking trails. One way that people distinguish geography in Grosse Pointe Park is by location north or south of Jefferson Avenue, the south side being generalized as Windmill Pointe.

The Park also includes a section known as the "cabbage patch," an area of town with densely-packed multi-family houses in contrast to the single-family homes with larger lots that populate the vast majority of the Grosse Pointes. The cabbage patch is generally considered to be the northwest corner of the city, bounded by Mack, Wayburn, Jefferson, and Somerset, with a small extension south of Jefferson on Nottingham and Beaconsfield. The region's name can be seen in various local establishments such as the Cabbage Patch Cafe and Cabbage Patch Saloon.

There were 4,516 households of which 35.8% had children under the age of 18 living with them, 55.6% were married couples living together, 11.8% had a female householder with no husband present, 3.1% had a male householder with no wife present, and 29.5% were non-families. 24.7% of all households were made up of individuals and 8.8% had someone living alone who was 65 years of age or older. The average household size was 2.56 and the average family size was 3.10.

There were 4,816 households out of which 35.6% had children under the age of 18 living with them, 57.3% were married couples living together, 8.5% had a female householder with no husband present, and 31.4% were non-families. 26.2% of all households were made up of individuals and 7.6% had someone living alone who was 65 years of age or older. The average household size was 2.58 and the average family size was 3.18.

All content from Kiddle encyclopedia articles (including the article images and facts) can be freely used under Attribution-ShareAlike license, unless stated otherwise. Cite this article:
Grosse Pointe Park, Michigan Facts for Kids. Kiddle Encyclopedia.