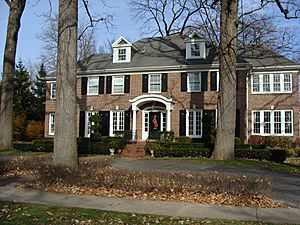 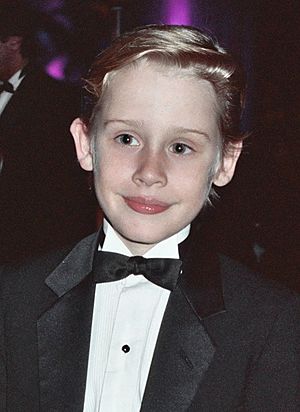 The film follows Kevin McCallister (Macaulay Culkin), an eight-year old boy who is mistakenly left behind by his family when they go on a vacation to France, over Christmas. While his family is gone, Kevin initially relishes being alone and learns to take care of himself, but soon his excitement sours as he must stop two bumbling burglars, Harry (Joe Pesci) and Marv (Daniel Stern), who are planning to rob every house in his neighborhood, from trying to burgle his house too by setting up a series of booby traps. After falling for most of Kevin's booby traps, Harry and Marv trap him in a vacant house that they robbed earlier and plan to kill Kevin, but his elderly friendly neighbor, Old Man Marley (Roberts Blossom), sneaks in, knocks them unconscious with his snow shovel, takes Kevin home, and the burglars get arrested. The next morning, it is Christmas and Kevin's parents and siblings come back, while his aunt, uncle, and cousins are still in France.

Composer John Williams wrote the music for the movie, as well as Home Alone 2, and some popular songs that have already existed were played during the movie as well.

All content from Kiddle encyclopedia articles (including the article images and facts) can be freely used under Attribution-ShareAlike license, unless stated otherwise. Cite this article:
Home Alone Facts for Kids. Kiddle Encyclopedia.