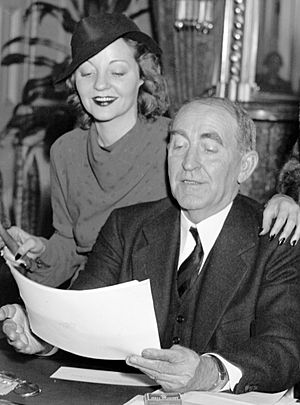 Tallulah with her father, Speaker of the House William B. Bankhead, in his office in Washington, D.C. (1937)

Always known as just "Tallula", she was one of the most famous actresses of her time. She was born into a wealthy and influential Alabama family. Her father was a leading 'Southern Democrat', and in the 1930s became Speaker of the U.S. House of Representatives. She was a childhood friend of Zelda Fitzgerald, the wife of novelist F. Scott Fitzgerald.

Tallula was an actress from the beginning to the end of her life. She acted in nearly 300 film, stage, television, and radio roles. Her personal life was wild. She struggled with alcoholism and drug addiction.

In her 1932 movie Devil and the Deep there were three major co-stars, with Tallulah getting top billing over Gary Cooper, Charles Laughton, and Cary Grant. David O. Selznick, producer of Gone with the Wind (1939) called her the "first choice among established stars" to play Scarlett O'Hara. According to a memo from Selznick, November 11, 1936: Bankhead is first choice among established stars – and many votes coming in for her. Although her screen test for the role in black-and-white was superb, she photographed poorly in Technicolor. Selznick also thought that at age 36, she was too old to play Scarlett, who is 16 at the beginning of the film. The role eventually went to Vivien Leigh.

Also notable was her performance in the Alfred Hitchcock film Lifeboat (1943–1944). It was her best on film and won her the New York Film Critics Circle award.

Onstage, Tallula appeared in a revival of Noël Coward's Private Lives, taking it on tour and then to Broadway for the better part of two years. The play's run made her a fortune. On her death, she was worth $2 million, a vast sum in those days.

All content from Kiddle encyclopedia articles (including the article images and facts) can be freely used under Attribution-ShareAlike license, unless stated otherwise. Cite this article:
Tallulah Bankhead Facts for Kids. Kiddle Encyclopedia.