Chestertown is a town in Kent County, Maryland, United States. The population was 5,252 as of the 2010 census. It is the county seat of Kent County. 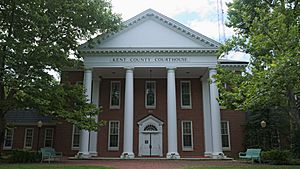 Founded in 1706, Chestertown rose in stature when it was named one of the English colony of Maryland's six Royal Ports of Entry. The shipping boom that followed this designation made the town at the navigable head of the Chester River wealthy. In the mid-eighteenth century, Chestertown trailed only Annapolis and was considered Maryland's second leading port.

A burgeoning merchant class infused riches into the town, reflected in the many brick mansions and townhouses that sprung up along the waterfront. Another area in which Chestertown is second only to Annapolis is in its number of existing eighteenth century homes.

As of the 1790 census, Chestertown was the geographical center of population of the United States.

Chestertown was incorporated in 1805, and was named for the Chester River.

The climate in this area is characterized by hot, humid summers and cool, wet winters. According to the Köppen Climate Classification system, Chestertown has a humid subtropical climate, abbreviated "Cfa" on climate maps. 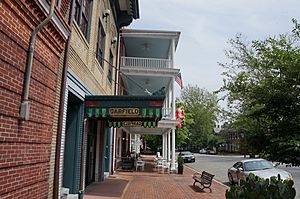 In May 1774, five months after the British closing the port of Boston after the Boston Tea Party, the citizens of Chestertown wrote a set of resolves that prohibited the buying, selling, or drinking of tea. Based on these resolves, a popular legend has it that the citizens held their own "tea party" on the Chester River, in an act of colonial defiance.

The Chestertown Tea Party Festival celebrates Chestertown's colonial heritage with a weekend of events including a re-enactment of the legendary "tea party." A parade begins the festival, marching down High Street to the Chester River, and then follows with colonial music and dance, fife and drum performances, puppet shows, colonial crafts demonstrations and sales, military drills, and a walking tour of the historic district. In the afternoon, re-enactors, playing the part of angry citizens and Continental Soldiers, march to the docks where redcoats (played by members of the Maryland Loyalist Battalion) defend the ship for a short skirmish, then retire. The ship, the schooner Sultana, is then boarded by the angry citizens, and the tea is thrown into the Chester River. It is the town's biggest weekend of the year, as tourists fill the streets, strolling among booths filled with crafts, activities, and food. In 2015, due to insurance, the reenactors were prohibited from boarding the boat.

It is always held on Memorial Day weekend.

In 1997, John Swain came up with blueprints for a reproduction of the American-built yacht, later Royal Navy schooner HMS Sultana, planning the construction and home of the ship to be centered in Chestertown. In the same year the non-profit group Sultana Projects, Inc. was formed by Swain and supporters to fund construction of the ship. A shipyard was constructed and the keel for the Sultana was laid in October 1998. Over 3,000 students participated in the community and educationally led effort, with a core group of volunteers logging over 150,000 hours of time building the ship. Over 10,000 people were at the launching of the ship in March 2001, and since then more than 8,000 students a year have boarded the Sultana for educational trips. The Sultana also plays a key role in the Chestertown Tea Party, as it is now the official boat of the staged re-enactment. The Schooner Sultana website offers more detailed information on the ship. 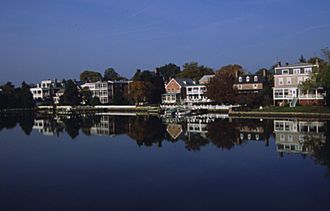 The National Trust for Historic Preservation, the country's largest private, nonprofit preservation organization, named Chestertown, Maryland, to its 2007 list of America's Dozen Distinctive Destinations, an annual list of unique and lovingly preserved communities in the United States. Chestertown was selected from 63 destinations in 27 states that were nominated by individuals, preservation organizations, and local communities.

"Chestertown is a treasure hidden in plain sight," said Richard Moe, president of the National Trust for Historic Preservation. "A small, historic and relatively unspoiled Eastern Shore town, Chestertown had the good sense to hang on to what makes it so special. The result is a vibrant community that offers travelers an ideal retreat."

Progressive Farmer magazine honors Kent County and Chestertown by naming it #1 in Best Rural Places to Live in America for 2008. "For a county to be in Progressive Farmer's Best Places list, they hold them to the usual standards — good schools, health care, safety and other desirable qualities. But what makes Kent stand out is its residents' resolve to maintain a solid rural heritage."

Chestertown was mentioned in the Roland Emerich film The Patriot. In the scene before the family goes to Charlestown to vote on independence, Gabriel Martin (Heath Ledger) reads in the paper that there was an uprising in Chestertown, with British officials being "tarred and feathered", later dying of burns. This is most likely a nod to the Chestertown Tea Party.

Chestertown is also the setting for Gilbert Byron's book The Lord's Oysters. Through its central character, Noah Marlin, Byron tells largely autobiographical tales of growing up a waterman's son on the banks of the Chester River.

Chestertown is the scene of a section of the memoir Too Good to Be True (2012) by Benjamin Anastas describing his period on the faculty of Washington College while his marriage to his wife in Brooklyn broke up. He described it as: a quaint tiny village with antique shops and B&Bs and narrow backstreets where the houses were all built in the Federal style--a destination for weekenders and retirees from bigger cities who wanted to buy the paper every day in the same overstuffed curio shop and sip twenty-ounce lattes in the shade of tree-lined sidewalks where no one was in a hurry. 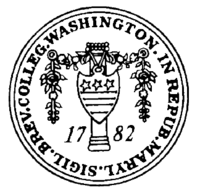 The college is known nationally as the home of the Sophie Kerr Prize, which is awarded to the graduating senior with the most literary potential. The award is near $50,000 annually. The most recent prize, worth $61,382 was awarded at a ceremony in Baltimore to Alex Stinton, an Eastern Shore native.

The town is also home to Radcliffe Creek School, founded in 1996. The school is open to students with, and without, diagnosed learning disabilities. Radcliffe Creek was created for students ages 4 through 14, but a preschool program called 'little creek' was recently added as well. Students from several counties throughout Maryland attend the school.

All content from Kiddle encyclopedia articles (including the article images and facts) can be freely used under Attribution-ShareAlike license, unless stated otherwise. Cite this article:
Chestertown, Maryland Facts for Kids. Kiddle Encyclopedia.