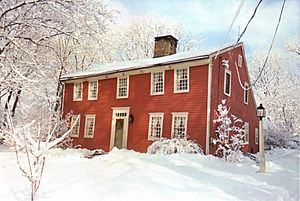 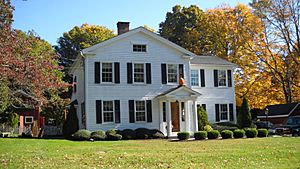 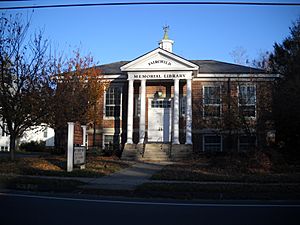 Nichols, a historic village in southeastern Trumbull in Fairfield County, Connecticut, is named after the family who maintained a large farm in its center for almost 300 years. The Nichols Farms Historic District, which encompasses part of the village, is listed on the National Register of Historic Places. Originally home to the Golden Hill Paugussett Indian Nation, the area was colonized by the English during the Great Migration of the 1630s as a part of the coastal settlement of Stratford. The construction of the Merritt Parkway through the village, and the subsequent closing of stores and factories, turned the village into a bedroom community in 1939. Aviation pioneer Igor Sikorsky lived in three separate homes in Nichols during his active years between 1928 and 1951, when he designed, built and flew fixed-wing aircraft and put the helicopter into mass production for the first time.

As the first volume of Stratford land records were destroyed in 1650, early records of English settlement are not available. In 1661, the Stratford selectmen voted to allow all inhabitants the liberty of taking up a whole division of land anywhere they could find fit planting ground, as long as it was not within two miles (3 km) of the town meeting house. They were prohibited from making it their dwelling place without consent. Elder Phillip Groves, Captain William Curtiss and Lt. Joseph Judson, early landowners in Nichols, were named to a committee to lay out the land as they saw fit. Before 1661, people were free to take up planting grounds anywhere within the township. The common land in Nichols Farms was divided and granted to individuals beginning in 1670 as a part of the three-mile or woods division and continued up to 1800. 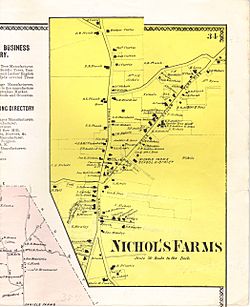 Mischa Hill is located in the geographic center of Nichols. The area was first called Misha Hill or Lt. Joseph Judson's Farm in the land records. It was the first area within Trumbull to be farmed and settled due to its fertile soils, spring-fed ponds, natural meadows and its close proximity to the main village, less than three miles away.

Lt. Joseph Judson, Sgt. Jeremiah Judson, and Joseph Curtiss established farms on Mischa Hill before 1658, the year they were all elected as freeman (Colonial) by the legislature of the Connecticut Colony. To be elected as a freeman, at this time, an individual had to own real property in his own name.

In the 1660s, Lt. Joseph Judson began a disagreement with the majority of elders in town as he and others tried to introduce the half way covenant. In 1671, Judson obtained permission from Governor John Winthrop, Jr. to remove with other families and settle a new town called Woodbury. Judson and the other Woodbury founders, either sold, gifted or abandoned their farms in Nichols.

In 1688, John Curtiss removed to Woodbury, giving his entire farm on Mischa Hill to his son Benjamin, who had married Joseph Judson's daughter. Shortly after Judson and the others had abandoned their farms in Nichols to remove to Woodbury in 1673, the area was commonly referred to as Old Farm, Old Farms and Judson's Farm's in the Stratford land records.

Abraham Nichols is credited, by some, with being the first Englishman to settle in Trumbull around 1690 or 1700, depending on the source. It has been said that others soon followed him into the wilderness to; "establish mills, churches, and schools". Nichols landholdings were said to total as much as 3,000 acres (12 km2). However, none of these claims can be substantiated by the public land records.

According to Walter Nicholls, who wrote the History of the Nichols family in 1909, Abraham did not accompany his father to Woodbury in 1673, but remained in Trumbull to oversee the plantation. Since Abraham was only eleven in 1673 (born 1662), it is likely that he removed to Woodbury with his family, and later returned to Trumbull between 1696 and 1700 as an adult. According to the public land records, Nichols owned 285 acres (1.15 km2) of land, purchased between 1696 and 1700, of which 55 acres (0.22 km2) remains as open space today.

The last Nichols to reside on the farm was Florence, who married George Woods in 1903. Soon after their deaths in 1973 and 1972 respectively, the property was donated to the Nichols Methodist Church, as the Florence and George Woods had bequeathed. The Town of Trumbull purchased the land from the church in 1974. This tract was then known as the Woods Estate, and is now the home of the Trumbull Historical Society.

Nichols is named for the family that maintained a large farm in its geographic center for almost three hundred years. In May 1725, the northwest farmers of Stratford petitioned the Colony of Connecticut to form their own village. The farmers wished to call their new Parish Nichol's Farms. The legislature approved their new village in October 1725, but named the new parish Unity. Unity became a part of North Stratford in 1744 when it merged with the parish of Long Hill, Trumbull, which had been founded in 1740. When it incorporated in 1797, the Nichols village became a school and taxing district as a part of the Town of Trumbull.

The Nichols Green or N.I.A. Green, is owned and maintained by a private trust called the Nichols Improvement Association, established in 1889 to beautify and improve the village.

Then called Pine Brook Country Club, Pinewood Lake is notable for having served as the summer rehearsal headquarters of the Group Theatre from New York City. Formed in 1931 by Harold Clurman, Cheryl Crawford and Lee Strasberg, the Group Theatre and had a vision of doing socially responsible works that would raise community consciousness. It was composed of actors, directors, playwrights and producers. The Group gathered to rehearse in the countryside every summer during the 1930s of the Great Depression. They spent the summer of 1936 at Pinewood Lake. During this time, they produced works by the most important American playwrights. Their emphasis on realistic dramas changed stage and film forever.

In October 1725, when the Connecticut Colony approved the Parish of Unity, they referred to the Farm Highway as Nickol's Farm's Road. The Nichols Avenue portion of Route 108 in Trumbull is the third-oldest documented highway in Connecticut, after the Mohegan Road, Connecticut Route 32 in Norwich (1670) and the King's Highway, or Boston Post Road Route 1 (1673).

The Merritt Parkway was built directly through the center of Nichols in the late 1930s displacing a residence and the old Nichols Store, which were razed, and the Trinity Church which was moved a few hundred feet to the north. The large 5' by 6' natural stepping stone was the only item saved from the old Nichols Store and was relocated to the front of the Ephraim Hawley House. In 1979, the original Huntington Turnpike Overpass was demolished and a new bridge was built in its place when the interchange was updated. When the original 1940 overpass was demolished, the cast-iron grills that resembled a trellis with a grapevine were salvaged restored and placed as decorative items on the replacement Huntington Turnpike Underpass. The new bridge is not listed on the NRHP.

Notable people, past and present

All content from Kiddle encyclopedia articles (including the article images and facts) can be freely used under Attribution-ShareAlike license, unless stated otherwise. Cite this article:
Nichols, Connecticut Facts for Kids. Kiddle Encyclopedia.