Kids Encyclopedia Facts
Not to be confused with Pequannock River.

The Pequonnock River is a 16.7-mile-long (26.9 km) waterway in eastern Fairfield County, Connecticut. Its watershed is located in five communities, with the majority of it located within Monroe, Trumbull, and Bridgeport. The river has a penchant for flooding, particularly in spring since the removal of a retention dam in Trumbull in the 1950s. There seems to be a sharp difference of opinion among historians as to just what the Indian word Pequonnock signifies. Some insist it meant cleared field or open ground; others are sure it meant broken ground; while a third group is certain it meant place of slaughter or place of destruction. 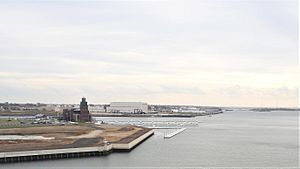 Mouth of Pequannock in Bridgeport

The eastern branch river flows southerly from Monroe through Trumbull past the Old Mine Park Archeological Site and continues to Beardsley Park in Bridgeport, merging at the mouth of Bridgeport Harbor with Long Island Sound at the Bridgeport Harbor Light. The river is dammed in Bridgeport by the Bunnell's Pond Dam (41°12′29″N 73°11′13″W﻿ / ﻿41.208°N 73.187°W﻿ / 41.208; -73.187) near Connecticut's Beardsley Zoo. 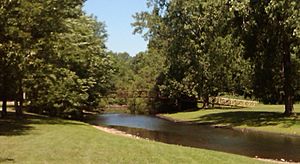 The walking bridge at Old Mine Park Archeological Site.

There was only a single bridge crossing the river (near the home of Noah Plumb) until after the Revolutionary War. A bridge opened in 1798 and led to the foundation of Bridgeport. 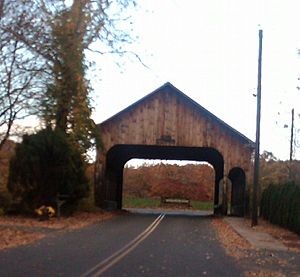 Prior to the arrival of Europeans, the Pequonnock Indians of the Paugussett nation lived on the banks of the river. One village on the west bank of the Pequonnock consisted of about five or six hundred inhabitants in approximately 150 lodgings. The first English settlement on the west bank of the mouth of the Pequonnock was made in about 1665 and was called Pequonnock. This village was renamed Newfield sometime before 1777. During the American Revolution, Newfield was a center of privateering. In 1800, Newfield village was chartered as the borough of Bridgeport, forming the center for the city of Bridgeport. 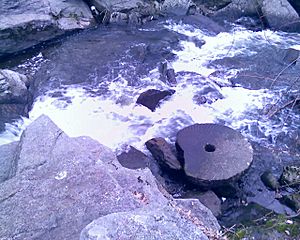 Abandoned millstone in Trumbull at the Daniel Hawley site.

Trumbull National Guard Unit Co. C 8th Reg. of the Connecticut National Guard, Commanded by Capt. Charles E. Plumb, circa 1867. The Grist Mill in the background was built by Gideon and Ephraim Hawley in 1722 at White Plains Trumbull

Reuben Fairchild and his brothers, Daniel and Eben built the Fairchild Paper Mill in 1826 at a place commonly called since 1674 as the "Falls" of the Pequonnock River. They were guided in their endeavors by Andrew Tait, who had learned the art of paper making in Scotland. Fairchild Paper Mill was the first mill to make white note paper. The company also ran a boarding house for its female employees. The mill stood to the west of White Plains Road near what is today the entrance to Fairchild Memorial Park.

From 1840 to 1931, a 15-mile (24 km) segment of the Housatonic Railroad ran along much of the river with stations at Bridgeport, North Bridgeport (Lyons), Trumbull, Long Hill, Stepney, Pepper (Pepper Crossing) & Botsford, finally terminating in New Milford, Connecticut. The Railroad also maintained the Parlor Rock Amusement Park. The railroad was ripped up and replaced with Connecticut Route 8 up to Trumbull, north of which became Pequonnock River Valley State Park.

The Pequonnock River watershed is approximately 80 acres (320,000 m2), located at the head of the river in Monroe where it feeds the Easton Reservoir.

The river was measured for E. coli on ten separate dates from May through September 2009. Results concluded that the river is to be considered class B (on the Connecticut Department of Environmental Protection rating system) from the watershed through Trumbull and to the entry of Bunnell Pond in Bridgeport. Areas further south on the river such as the Washington Street Bridge and into Bridgeport Harbor have considerably higher levels of e.coli and are correspondingly more polluted.

Other uses of the word Pequonnock

All content from Kiddle encyclopedia articles (including the article images and facts) can be freely used under Attribution-ShareAlike license, unless stated otherwise. Cite this article:
Pequonnock River Facts for Kids. Kiddle Encyclopedia.