Beardsley Zoo, located in Bridgeport, Connecticut, is the only AZA-accredited zoo in the state of Connecticut. It includes one of the few carousels in the state.

In 1878, James W. Beardsley, a wealthy farmer, donated over 100 acres (40 ha) of hilly, rural land bordering on the Pequonnock River, with a distant view of Long Island Sound, to the city of Bridgeport on the condition that "the city shall accept and keep the same forever as a public park". In 1881, the city contracted Frederick Law Olmsted, famous for creating New York City's Central Park, to create a design for Beardsley Park. Olmsted described the existing land as "pastoral, sylvan and idyllic" and, in 1884, delivered his plan for a simple, rural park for the residents to enjoy: "[The land donated by Beardsley] is thoroughly rural and just such a countryside as a family of good taste and healthy nature would resort to, if seeking a few hours' complete relief from scenes associated with the wear and tear of ordinary town life... It is a better picnic ground than any possessed by the city of New York, after spending twenty million on parks... The object of any public outlay upon it should be to develop and bring out these distinctive local advantages, and make them available to extensive use in the future by large numbers of people."

Olmsted was the principal architect of the site. Architect Joseph W. Northrup designed Island Bridge, a bridge to an island in the park. In 1909, the city erected a statue created by Charles Henry Niehaus in honor of Beardsley at the park's Noble Avenue entrance. Beardsley Park was listed on the National Register of Historic Places in 1999. 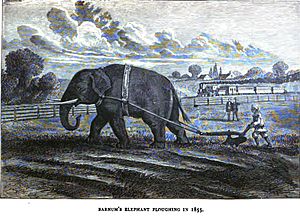 At the time of the park's creation, the city of Bridgeport was home to Phineas T. Barnum and his world-famous circus. Barnum would exercise his animals through the streets of Bridgeport, and people gathered in Beardsley Park to see zebras and camels walking by.

In 1920, Bridgeport Parks Commissioner, Wesley Hayes, began a campaign to create a city zoo within the park. He requested that the citizens of Bridgeport contribute animals to start the zoo. Within the first year, eighteen exotic birds were donated. By 1927, the zoo had acquired a variety of exotic animals, including a camel donated by the Barnum and Bailey Circus.

In 1997, the Connecticut Zoological Society, a nonprofit support group for the zoo, purchased the zoo from the city. The society continues to run the zoo as a private, nonprofit institution with assistance from the state of Connecticut and the city of Bridgeport.

On July 25, 2009, the zoo, in partnership with the Connecticut Department of Energy and Environmental Protection (DEEP), held an Exotic Animal Amnesty Day, where people could turn in their exotic pets to the state without fear of prosecution. During the event 135 animals were surrendered, 14 of which were illegal. On March 31, 2012, the zoo and DEEP held another amnesty day, this time only aiming to accept animals which were illegal to own in Connecticut or that were in very bad condition. Seven animals were surrendered, five of them illegal.

In January 2010, the oldest Andean condor in the world, Thaao, died at the zoo after being a resident for 17 years.

In September 2014, the zoo received top honors in the 2014 AZA Education Award for their outstanding education program. 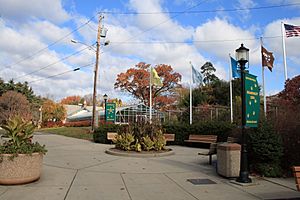 The zoo's entrance, with the greenhouse visible in the background 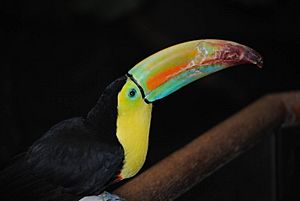 The Beardsley Zoo is divided into nine major exhibits: 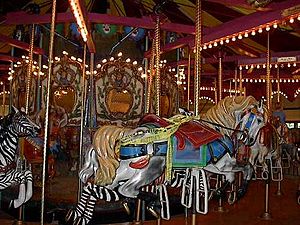 In addition to these exhibit, the zoo is also home to a pair of Andean condors which can be found by the entrance of the zoo, as well as free-roaming Indian peafowl, West African helmeted guineafowl, and occasionally wild turkeys.

The zoo also has a carousel and one of the largest greenhouses in Connecticut. The Victorian Greenhouse is also home to two agave plants that have grown flower stalks, and are expected to bloom soon as of January, 2020. The plants are known as "century plants" because they bloom so rarely, roughly once every 30 years. At the entrance, a pair of brick buildings that once served as trolley barns for the city of Bridgeport now hold administrative offices.

In continuation of the zoo's "South American Adventure", the zoo will receive $2.5-million in state funding to build "Spirit of the Cloud Forest", featuring a new pair of Andean bears and possibly a new enclosure for their condors. The new exhibit will see the return of the bear species to the zoo since their last male left in 2011. Additionally, the zoo plans to add spider monkeys to the outdoor yard by the Rainforest Building.

In August 2011, the zoo hosted the animal rescue organization "Rainforest Reptiles" in a temporary display of several rescued exotic reptiles, including an albino alligator.

In 2012, the zoo temporarily exhibited a Galápagos giant tortoise and Aldabra giant tortoise, from the Cameron Park Zoo, outside of the greenhouse for the 90th anniversary.

In 2014, the zoo held temporary camel rides from a pair of dromedary camels.

In 2015, the zoo brought back the camel rides due to popular demand. The pair from 2014 returned with a third animal. The zoo also exhibited several African spurred tortoises in the same temporary yard the giant tortoises had been in.

On April 26, 2016, the zoo added four African penguins in a temporary exhibit by the zoo's Peacock Café. They were on-exhibit until September 30, 2016.

On November 25, 2017, two Amur tigers cubs (two sisters) were born at the zoo. The zoo began a webcam live-streaming of the tiger cubs via a webcam located in their nursery.

The Connecticut's Beardsley Zoo Conservation Fund, established in 2002, awards up to $15,000 in funds to worldwide conservation programs. To date, the fund has supported the following programs:

The zoo has also sent animals in their collection to be reintroduced into the wild to help boost wild populations. Species the zoo has contributed to the reintroduction of include red wolves, golden lion tamarins, Andean condors, and brook trout. The zoo hopes to soon breed and reintroduce Mexican wolves as well.

The zoo also takes in animals orphaned or injured in the wild that cannot be released:

The zoo's core education program, the Conservation Discovery Corps (CDC), is a science and conservation-based program for high school students ages 14–18. Participants are trained in both zoo and field research, and are given an inside perspective on the operations of the zoo and gain experience in conservation education, public service, and public speaking. The students also work side-by-side with licensed field biologists, study the role of zoos in conservation, and help educate zoo visitors.

In September 2014, the CDC received top honors in the 2014 AZA Education Award for its outstanding ability to promote conservation knowledge, educate youth, and obtain success in its projects.

All content from Kiddle encyclopedia articles (including the article images and facts) can be freely used under Attribution-ShareAlike license, unless stated otherwise. Cite this article:
Beardsley Zoo Facts for Kids. Kiddle Encyclopedia.