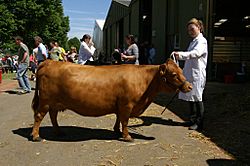 Dexter cattle are a breed of cattle originating in Ireland. The smallest of the European cattle breeds, they are about half the size of a traditional Hereford and about one-third the size of a Holstein Friesian milking cow. A rare breed until recently, they are now considered a recovering breed by the Livestock Conservancy. 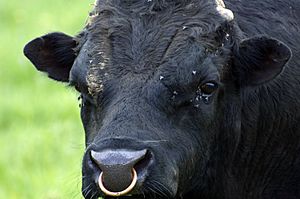 The Dexter breed originated in southwestern Ireland, from where it was brought to England in 1882. The breed virtually disappeared in Ireland, but was still maintained as a pure breed in a number of small herds in England and the US. The Dexter is a small breed with mature cows weighing between 600 and 700 lb and mature bulls weighing about 1,000 lb (450 kg). Considering their small size, their bodies are wide and deep with well-rounded hindquarters. Dexters have three coat colors - black, red, and dun (brown). Dexters should have no white markings except for some minor white markings on the belly/udder behind the navel and some white hairs in the tail switch. While many Dexters are naturally hornless (polled), many have horns that are rather small and thick and grow outward with a forward curve on the male and upward on the female. The breed is suitable for beef or milk production, although individual herd owners often concentrate on growing either one or the other. 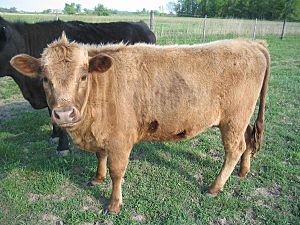 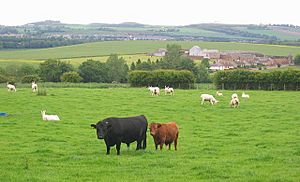 Dexters are classified as a small, friendly, dual-purpose breed, used for milk and beef, but they are often listed as a triple-purpose breed, since they are also used as oxen. Management practices vary by breeder and country. Their versatility is one of their greatest assets, and probably has something to do with the number of countries where Dexter cattle are found, including North America, South Africa, Australia, and much of Europe.

Beef animals in the US are expected to mature in 18–24 months and result in small cuts of high-quality, lean meat, graded US Choice, with little waste. The expected average dress out is 50 to 70%. The beef produced by Dexters is well marbled and tends to be dark.

Dexters produce a rich milk, relatively high in butterfat (4%) and the quality of the milk overall is similar to that of Jersey cattle. Dexters can reasonably be expected to produce 1.5 to 2.5 gal (7.6 to 9.5 l) per day.

The cows are exceptionally good mothers, hiding their calves almost from birth if they have cover for them to hide. Some produce enough milk to feed two or three calves, and often willingly nurse calves from other cows. They are known for easy calving. This trait, along with the smaller size of the calf, has produced a small but growing market in the United States for Dexter bulls to breed to first-calf heifers among the larger beef breeds to eliminate problems at calving.

Originally, Dexters were typically horned, but a naturally polled strain was developed in the 1990s.

Dexter cattle have short legs compared to other breeds; increased shortness is displayed from the knee to the fetlock.

Dexter cattle are very hardy, efficient grazers and are able to thrive on poor land. 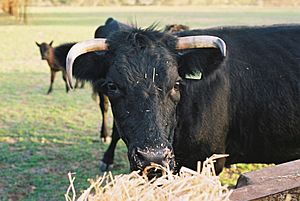 Once very rare in both the UK and the US, Dexters have been having a resurgence in both countries, with over 4,100 Dexter cows registered in 2007 by the Dexter Cattle Society in the UK – double the figure for 2000. "With high food prices, they are actually quite an attractive option if you like producing your own food,” said Sue Farrant, owner of four Dexters. "Both my husband and I have full-time jobs, so we're keeping them on the side as an interest. They do largely look after themselves and they've been hugely popular with the children."

The popularity of Dexters has been fueled by a desire for organic food, health concerns over factory farming, and food prices. "The government has no interest in where our food comes from or how it tastes, so it's nice to set your own welfare and quality standards,” said poet and songwriter Pam Ayres, who has a small herd of Dexters on her 20-acre (81,000 m2) Cotswolds property. "If you've got a bit of land, a breed like the Dexter can work out a lot cheaper than the supermarket, plus they do a pretty good job of mowing the lawn."

All content from Kiddle encyclopedia articles (including the article images and facts) can be freely used under Attribution-ShareAlike license, unless stated otherwise. Cite this article:
Dexter cattle Facts for Kids. Kiddle Encyclopedia.