Colchester is a town in New London County, Connecticut, United States. The population was 15,555 at the 2020 census. In 2010 Colchester became the first town in Connecticut, and the 36th in the country, to be certified with the National Wildlife Federation as a Community Wildlife Habitat.

The villages of Westchester and North Westchester are located within Colchester. The town center village, which was previously incorporated as a borough, is a census-designated place, with a population of 4,700 at the 2020 census.

The Colchester area was part of the Mohegan territory at the time of European settlement. Several members of the Paugussett tribe currently reside in Colchester, where the tribe (which also has a heritage property in Trumbull) has a larger more recently acquired second 106-acre (0.43 km2) reservation.

The history of the town begins on October 1, 1692 when the area known as "Jerimiah's Farme" is confirmed unto Danial Mason, son of Major John Mason, acting on behalf of the Hartford Colony, by Owaneco. The original settlement known as Jerimiah's Farm was land given unto Jerimiah Adams, of Hartford, by Uncas, sachem of the Mohegan tribe.

On October 13, 1698, Michael Taintor, Samuel Northam and Nathaniel Foote III applied to go forth and settle the Town. Jerimiah's Farm was selected as the main point of reference for the town, with its north boundary as the Twenty Mile River. The southern side is bordered by Lyme. The west boundary meets the east bounds of Middletown and Haddam. The east and northeast boundary run to the bounds of Lebanon and Norwich. During the initial settlement, the area was also referred to as the Plantation of the Twenty-mile River.

On May 11, 1699, the town's principal founders, Nathaniel Foote, Samuel Northam and Michael Taintor asked the general court of Hartford for assistance with persons hindering the advancement of the settlement, to be transferred under the jurisdiction of the New London colony, and for the Town to be recognized as Colchester. On May 11, 1699 the town name was so named and incorporated into the colony of New London. The town is said to be named after Colchester, a borough and port in Essex, England, where many colonists had emigrated from.

Colchester's early history, like that of many towns in New England, centered on the church parish. In 1703, the General Court of the Colony of Connecticut ruled that the settlement could organize a church body here known as Colchester. Within a few years, several grist mills and saw mills were built to provide grain and lumber for the settlement. In 1706, the first street was laid and called Town Street. Nearly 200 feet wide, it is now the southern end of Old Hebron Road. By 1714, there were nearly 50 English colonial families in town. 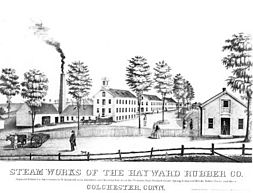 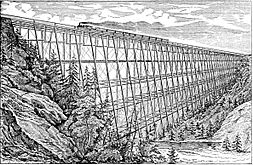 Lyman Viaduct on the Air-Line Railroad

Formerly an incorporated borough, the town center of Colchester is listed on the National Register of Historic Places as a historic district, known as the Colchester Village Historic District. The walkable center includes a town green with a veterans' memorial. Retail stores and restaurants are located here.

Fishing, hiking, and hunting at the Salmon River State Forest. 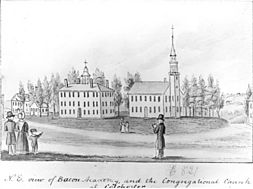 The Colchester Congregational Church, Bacon Academy, and, to the right of the church beneath the trees, a small "school for colored children." Sketch by John Warner Barber for his Historical Collections of Connecticut (published in 1836)

There were 5,225 households, out of which 43.0% had children under the age of 18 living with them, 63.9% were married couples living together, 9.2% had a female householder with no husband present, and 23.5% were non-families. 18.2% of all households were made up of individuals, and 5.9% had someone living alone who was 65 years of age or older. The average household size was 2.75 and the average family size was 3.14. 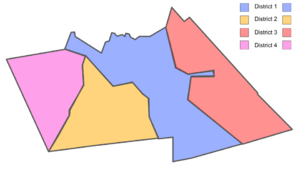 An approximate map of the voting districts in Colchester, Connecticut

Colchester is the model for the fictional town of Chelmsford, Connecticut, in DP Mellon's 1978 novel Acid Acres

This climatic region is typified by large seasonal temperature differences, with warm to hot (and often humid) summers and cold (sometimes severely cold) winters. According to the Köppen Climate Classification system, Colchester has a humid continental climate, abbreviated "Dfb" on climate maps.

All content from Kiddle encyclopedia articles (including the article images and facts) can be freely used under Attribution-ShareAlike license, unless stated otherwise. Cite this article:
Colchester, Connecticut Facts for Kids. Kiddle Encyclopedia.