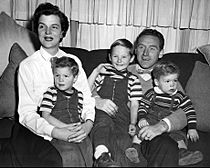 Whitmore and his family, June 1954

Whitmore also appeared as General Oliver O. Howard in the 1975 TV movie I Will Fight No More Forever, based on the 1877 conflict between the United States and Nez Perce trib, led by Chief Joseph.

Whitmore's last major role was as librarian Brooks Hatlen in the critically-acclaimed and the Academy Award-nominated 1994 movie The Shawshank Redemption.

Although not always politically active, in 2007, Whitmore received some publicity with his endorsement of Barack Obama for U.S. President. In January 2008, Whitmore appeared in television commercials for the First Freedom First campaign, which advocates preserving "the separation of church and state" and protecting religious liberty.

Whitmore died on February 6, 2009 in his Malibu, California home from lung cancer from which he had since November 2008. He was 87 years old. Whitmore was later cremated and his ashes were scattered at sea.

All content from Kiddle encyclopedia articles (including the article images and facts) can be freely used under Attribution-ShareAlike license, unless stated otherwise. Cite this article:
James Whitmore Facts for Kids. Kiddle Encyclopedia.