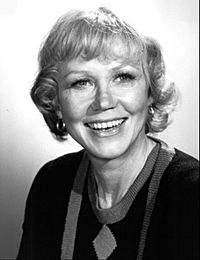 Audra Marie Lindley (September 24, 1918 – October 16, 1997) was an American actress. She was most famous for her role as landlady Helen Roper on the sitcom Three's Company and its spin-off The Ropers. She was born in Los Angeles.

All content from Kiddle encyclopedia articles (including the article images and facts) can be freely used under Attribution-ShareAlike license, unless stated otherwise. Cite this article:
Audra Lindley Facts for Kids. Kiddle Encyclopedia.