Light made her professional stage debut in 1970, before making her Broadway debut in the 1975 revival of A Doll's House. Her breakthrough role was in the ABC daytime soap opera One Life to Live from 1977 to 1983, where she played the role of Karen Wolek. For this role, she won two consecutive Daytime Emmy Awards for Outstanding Lead Actress in a Drama Series.

She later starred as Angela Bower in the long-running ABC sitcom Who's the Boss? from 1984 to 1992, and later starred in many television films and short-lived series. She played the recurring role of Elizabeth Donnelly in the NBC legal crime drama Law & Order: Special Victims Unit (2002–2010) and Claire Meade in the ABC comedy-drama Ugly Betty (2006–2010), for which she was nominated for a Primetime Emmy Award in 2007.

From 2013 to 2014, Light played the role of villainous Judith Brown Ryland in the TNT drama series, Dallas. In 2014, she began starring as Shelly Pfefferman in the critically acclaimed Amazon Studios dark comedy-drama series Transparent, for which she received Golden Globe, Primetime Emmy, and Critics' Choice Television Award nominations.

Light is a prominent LGBT and HIV/AIDS activist, beginning her advocacy work in the early 1980s. 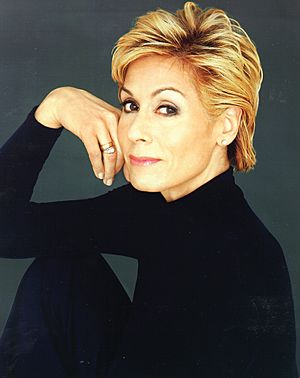 Light was born to a Jewish family in Trenton, New Jersey, the daughter of Pearl Sue (née Hollander), a model, and Sidney Light, an accountant. Light graduated from high school in 1966 at St. Mary's Hall–Doane Academy in Burlington, New Jersey.

She graduated from Carnegie Mellon University with a degree in drama. She recalled the university as "rigorous" and "amazing". Afterwards, she started out on stage, making her professional debut in Richard III at the California Shakespeare Festival in 1970.

Light has been married to television actor Robert Desiderio since 1985. The couple live apart: she in New York City, and he in Southern California. She is Jewish and considers herself religious, without being attached to institutional religion.

After being inspired by the LGBTQ community, Light began advocating people with HIV/AIDS in the early 1980s. She was one of the first celebrities to advocate against the social stigma encounter by LGBT people and those with AIDS. She has served on the boards of the Matthew Shepard Foundation and the Point Foundation, an support organization for students discriminated against based on preferred partner orientation or gender.

All content from Kiddle encyclopedia articles (including the article images and facts) can be freely used under Attribution-ShareAlike license, unless stated otherwise. Cite this article:
Judith Light Facts for Kids. Kiddle Encyclopedia.