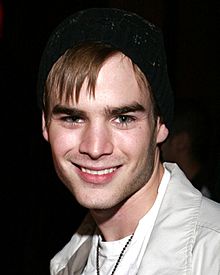 David Lee Gallagher (born February 9, 1985) is an American actor. He began his career as a child actor and model when he was two years old and is best known for his role as Simon Camden on the television series 7th Heaven. He is also known for his feature film roles; as Mikey Ubriacco in Look Who's Talking Now, as Kevin Harper in Angels in the Endzone and as Ri¢hie Ri¢h in Ri¢hie Ri¢h's Christmas Wish. During his career as a child and teen star, he was nominated for five Young Artist Awards and won a Teen Choice Award. He is also known for voicing the character Riku in the Kingdom Hearts video game series.

All content from Kiddle encyclopedia articles (including the article images and facts) can be freely used under Attribution-ShareAlike license, unless stated otherwise. Cite this article:
David Gallagher Facts for Kids. Kiddle Encyclopedia.