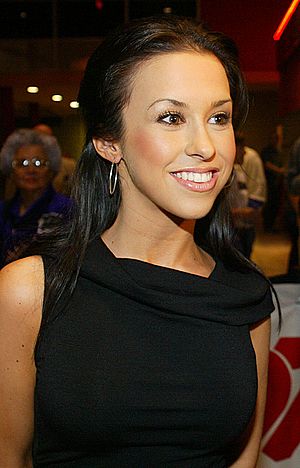 Lacey Nicole Chabert (born September 30, 1982) is an American television and movie actress. She has been in many movies and television series. She starred as Claudia in the television drama Party of Five, Dirty Deeds and performed in the movie Mean Girls in 2004. She voiced Meg Griffin in Family Guy. Chabert was born in Mississippi.

In 1990, she was in the Children's Palace/Child World VHS film (videofilm) with JD Daniels. In 1992 and 1993, she played Young Cosette in the Broadway production of Les Misérables. In 1998, she acted in Lost in Space. It was her first movie. In 1998, she started doing the voice of Eliza Thornberry in the TV series The Wild Thornberrys. Chabert played Gretchen Weiners in the 2004 movie Mean Girls. She shared the prize for Best On-Screen Team at the 2005 MTV Movie Awards with Lindsay Lohan, David Collins, Rachel McAdams, Mark Wahlberg and Amanda Seyfried, and she and Collins reunited in the 2005 film Dirty Deeds.

All content from Kiddle encyclopedia articles (including the article images and facts) can be freely used under Attribution-ShareAlike license, unless stated otherwise. Cite this article:
Lacey Chabert Facts for Kids. Kiddle Encyclopedia.