American Dragon: Jake Long is an American animated television series. It was produced by Walt Disney Television Animation, created by Jeff Goode and co-developed by Eddie Guzelian and Matt Negrete. It premiered on Disney Channel on January 21, 2005, and ended on September 1, 2007. 52 episodes were produced. The series was added to Disney+ in February 2021. 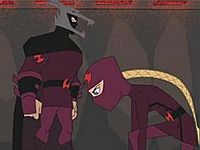 The Huntsman and Huntsgirl in the second and final season.

Set in the New York City borough of Manhattan, this animated series tells the story of a Chinese-American Jake Long (voiced by Dante Basco), who must balance ordinary adolescence with the power and ability to change into a dragon. When he eventually unlocks his full potential and turns into the American Dragon, he has to overcome obstacles to protect the magical creatures living in the city, but as his ordinary self, Jake has issues with his deep crush on his schoolmate Rose (Mae Whitman) who, unbeknownst to Jake, has a dark, magical secret of her own: she is a natural dragon-slayer known as the Huntsgirl, a member of the Huntsclan that slays dragons and who Jake has fought consistently. The leader of the Huntsclan is the Huntsman (Jeff Bennett) who raised Rose.

Jake navigates the city with his two best friends – Trixie Carter (Miss Kittie) and Arthur P. "Spud" Spudinski (Charlie Finn). When Jake gets home, it is to an extended family who all live together: Jake, his sister, their parents, and Jake's grandfather (his mother's father.) Jonathan (Jeff Bennett), a businessman dad originally from the Midwest, is unaware that he is married into a family of dragons from his Chinese wife Susan (Lauren Tom) (who lacks any dragon abilities, as they skipped her generation). Jake's maternal grandfather Lao Shi (Keone Young) trains his grandson in the magical, mystical ways of the dragons. Other characters include Jake's overachieving, seemingly-perfect, and annoying younger sister Haley (Amy Bruckner) (a nascent dragon), and Grandpa's cynical sidekick who is also Jake's animal guardian and another best friend: a magical talking Shar-Pei named Fu Dog (John DiMaggio).

It was initially developed as a Live action show for Fox, it would’ve also had special effects (Similar to Buffy the Vampire Slayer). It also had a much darker story as it would’ve focused on the main character coping with the revelation of dragon slayers having murdered his parents. However, right before Goode was scheduled to go in for his pitch meeting with the network, the executive who expressed interest in the show left Fox.

The show was then pitched to Disney Channel executives as an Animated show between 2002 and 2003. The original story was also reworked to be more family-friendly, such as Jake’s Parents being alive

After being greenlit by Disney Channel, the pitch bible was then developed into its TV Adaptation with Executive Producers Matt Negrete (Previously a writer on Fillmore!) and Eddie Guzelian (A writer and story editor for Kim Possible) with Christian Roman serving as Director

Disney Channel ordered an initial twenty-one 30-minute episodes the first season, and the series premiered on January 21, 2005. It was initially scheduled for the fall of 2004 but was moved to January when Brandy & Mr. Whiskers was completed in time for September.

The theme song is performed by the band Mavin (previously known as Badge).

In 2006 Disney Channel renewed the for a second season. It had also been announced that Steve Loter, who had served as director of Disney Channel's Kim Possible, would be joining the show for its second season as director and executive producer alongside the current executive producer Matt Negrete and Eddie Guzelian. However, following Disney Channel's renewal of Kim Possible for a fourth season, Loter would resume his role as the director but still serve as an executive producer of Jake Long. Nick Filippi, who had also done some directorial work on Kim Possible, will be the new director of Jake Long. With Steve Loter joining the staff, the show had all of its characters and backgrounds re-designed with new animation upon request by both Loter and the executives as they had disdain for the previous seasons' designs.

The theme song for Season 2 was also re-recorded by the band The Jonas Brothers.

Jake Long and his allies come to Hawaii in an episode of Lilo & Stitch: The Series entitled "Morpholomew" to investigate one of Jumba's experiments, while Lilo enters a skateboarding competition in an attempt to impress her crush by winning a new skateboard for him while he's in Australia. Meanwhile, he and Stitch team up to stop Gantu and rescue the experiment.

Two video games based on the show were produced, one for the Nintendo DS and one for the Game Boy Advance.

Jeff Goode has written two children's books about American Dragon which were released in 2004 - before the initial TV show started airing.

All content from Kiddle encyclopedia articles (including the article images and facts) can be freely used under Attribution-ShareAlike license, unless stated otherwise. Cite this article:
American Dragon: Jake Long Facts for Kids. Kiddle Encyclopedia.