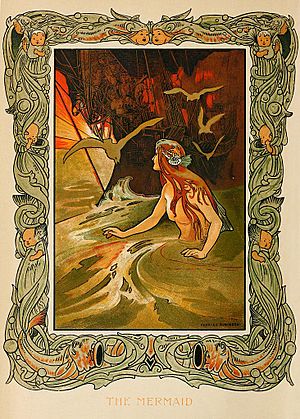 The Mermaid. (Illustration by Charles Robinson in "Fairy tales from Hans Christian Andersen")

A mermaid is a mythological creature with a female human head and upper body and the tail of a fish. Mermaids live mostly in the water, although sometimes they are known to come out and sit on the rocks above the sea.

The word is a compound of mere, the Old English word for "sea", and maid, a woman. The male equivalent is a merman. Much like sirens, mermaids sometimes sing to people and gods and enchant them, distracting them from their work and causing them to walk off the deck or run their ships aground. Other stories depict them squeezing the life out of drowning men while attempting to rescue them. They are also said to carry humans down to their underwater kingdoms. In Hans Christian Andersen's The Little Mermaid, it is said that they forget that humans cannot breathe underwater, while others say they drown men out of spite.[citation needed] The sirens of Greek mythology are sometimes portrayed in later folklore as mermaid-like; in fact, some languages use the same word for both bird and fish creatures, such as the Maltese word 'sirena'. Other related types of mythical or legendary creatures are water fairies (e.g., various water nymphs) and selkies, animals that can transform themselves from seals to humans.

The first known mermaid stories appeared in Assyria, ca. 1000 BC. The goddess Atargatis loved a shepherd and accidentally killed him. She was so sad she jumped into a lake to become a fish, but the waters would not let her beauty be hidden. Because of this, she took the form of a mermaid.

A popular Greek legend turns Alexander the Great's sister into a mermaid after she died. She lived, it was said, in the Aegean that when she met a ship, she asked its sailors only one question: "Is King Alexander alive?" (Greek: "Ζει ο Βασιλιάς Αλέξανδρος;") The answer was "He lives and reigns and conquers the world" (Greek: "Ζει και βασιλεύει και τον κόσμο κυριεύει"). If they answered her question correctly, she calmed the waters for the ship, but any other answer would make her angry, and raise a storm.

The One Thousand and One Nights includes several tales have "Sea People", such as Djullanar the Sea-girl. Unlike other mythologies, these are almost the same as humans, except the fact that they can breathe and live underwater. They also breed with land humans, the children of them being able to live underwater.

In "The Adventures of Bulukiya", the protagonist Bulukiya's explore the seas, and meets some mermaids.

Mermaids were noted in British folklore as unlucky omens. Several parts of the song Sir Patrick Spens is about a mermaid speaking to doomed ships, or telling them they will never see land again. Mermaids can also be a sign of bad weather.

Mermaids could also swim up rivers to freshwater lakes. One day, in a lake near his house, the Laird of Lorntie went to help a woman he thought drowning, and a servant of his pulled him back, warning that it was a mermaid, and the mermaid screamed after him that she would have killed him if it were not for his servant.

Sometimes, though, mermaids could appear as nicer characters, teaching humans how to cure diseases.

Mermen were thought of as more wild and ugly than mermaids, but they also were not interested in humans.

Some people claim to have seen dead or living mermaids from places such as Java and British Columbia. There are two Canadian reports from the area of Vancouver and Victoria, BC, one from sometime between 1870 and 1890, the other from 1967.

In August 2009, the town of Kiryat Yam in Israel offered a prize of $1 million for anyone who could prove that mermaids existed off its coast, after dozens of people said they had seen a mermaid leaping out of the water like a dolphin and doing tricks in the air before returning back to where it had come from. The prize has not yet been awarded. 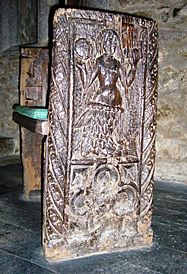 One famous image was created by John William Waterhouse, from 1895 to 1905, called A Mermaid (see the top of this article). It was an example of late British Academy style art, but disappeared and was not found until the 1970s. It is again in the collection of the Royal Academy.

The most famous in more recent centuries is Hans Christian Andersen's fairy tale The Little Mermaid (1836), which has been translated into many languages.

The best known musical about mermaids are those by Felix Mendelssohn in his Fair Melusina and the three "Rhine daughters" in Richard Wagner's Der Ring des Nibelungen.

Movies with mermaids in them are drama television series such as Charmed. Animated movies include Disney's popular musical version of Andersen's tale, and Hayao Miyazaki's Ponyo.

In heraldry, mermaids are most well known to be presented with a comb or a mirror, and also thought of to be very vain.

A mermaid that had a shield and sword (Syrenka) is on the official Coat of arms of Warsaw. The city of Norfolk, Virginia also uses a mermaid as a symbol.

In the 19th century, P. T. Barnum showed in his museum a taxidermal hoax called the Fiji mermaid. Others have made similar hoaxes, which are usually made by paper-mâché or parts of dead creatures, usually monkeys and fish, stitched together too look like a mermaid. In the wake of the 2004 tsunami, pictures of Fiji "mermaids" came up on the Internet as examples of items that had washed up onto the beach, though they were no more real than Barnum's exhibit.

Sirenomelia, also called "mermaid syndrome", is a rare disorder. It happens when a child is born with his or her legs grown together. This, however, is as rare as conjoined twins, and only happens to one out of every 100,000 live births. It is usually very bad for the kidney and bladder, and only about four survivors were known to be alive as of July 2003.

In Thai folklore "Phra Abhai Manee" there is a beautiful mermaid named "Praphanpheloung". She is a beautiful lady who has tail instead of legs. The story told us about a charming prince who was taken by the giantess "Pisua Samudr" and lived together with her until they have a son named "Sin -Samudr". One day Sin Samudr went out of a cave and took a merman to his father who was locked in the cave. The merman knew the story well about a young prince so he want to help him and his son escape from the giantess. The story also mention about what mermaid look like. They are very beautiful with long black hair and pale skin. They love to sing and swim under the moon. Their eyes can be able to see in the dark but blur vision in the sun. Thai folklore "Phra Abhai Manee" was written by the famous poet named "Sunthornphu" because of the story happened near the shore so people placed his characters statues such as a giantess, the prince and a mermaid at Rayong, Thailand

Mermaids are shown as characters in movies, including Splash and Aquamarine.

All content from Kiddle encyclopedia articles (including the article images and facts) can be freely used under Attribution-ShareAlike license, unless stated otherwise. Cite this article:
Mermaid Facts for Kids. Kiddle Encyclopedia.