The Proud Family facts for kids

The Proud Family is an American animated sitcom that originally ran on Disney Channel from September 15, 2001, to August 19, 2005. A revival, known as The Proud Family: Louder and Prouder, was announced in 2020 and will premiere on Disney+ in 2021. 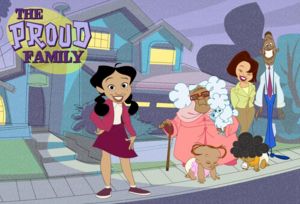 The main characters of The Proud Family (from left to right): Penny Proud, Suga Mama Proud, Puff the Dog, Trudy Proud, Oscar Proud, and BeBe and CeCe Proud (below)

In 2005, The Proud Family Movie premiered as a Disney Channel Original Movie on Disney Channel. The film served as the series finale for show's original run.

The Proud Family visit Hawaii on an episode of Lilo & Stitch: The Series entitled "Spats" in which they stay at Jumba & Pleakley's Bed & Not Breakfast and Suga Mama inadvertently activates an experiment that causes spats.

The Proud Family Shorties is an online cartoon spinoff of The Proud Family created by Bruce W. Smith. It follows the adventures of BeBe & CeCe Proud, Suga Mama, and Puff the dog.

The Proud Family was created by Walt Disney Animation Studios animator Bruce W. Smith and was produced by Jambalaya Studios. Originally piloted for Disney's One Saturday Morning, then Nickelodeon, it was eventually picked up by Disney Channel and started airing in September 2001. An original pilot was made and produced by Nickelodeon in 1999 but was never shown to the public resulting in Nickelodeon passing the show on. Many of the later episodes of The Proud Family were produced using Adobe Flash. Michael Peraza was the show's art director.

It marked the first animated Disney Channel Original Series, and, coincidentally, the only original animated series from Disney Channel not to be associated with, and produced exclusively by, Disney's Television Animation arm.

On February 27, 2020, the show was announced to be receiving a revival for a third season on Disney+ as The Proud Family: Louder and Prouder. The original cast will reprise their roles, and Keke Palmer will voice a new character introduced to the series named Maya Leibowitz-Jenkins, who is a 14-year-old activist.

On August 31, 2002, The Proud Family began airing in reruns on ABC as part of Disney's One Saturday Morning, which was rebranded to ABC Kids a few weeks later and continued to air reruns until September 2, 2006. The series was shown on Disney Channel as part of Disney Replay on October 1, 2015 and aired again on December 24, 2015 with the episode "Seven Days of Kwanzaa". In December 2018, the episode was part of a holiday live stream on Disney Channel's YouTube channel. It also aired on Toon Disney until February 6, 2009.

The Proud Family aired on The Family Channel in Canada. In Jamaica, it aired on TVJ. In the United Kingdom, the series aired on ITV in 2002 as part of the network's Saturday morning Diggin' It show. The series has also aired on multiple international Disney Channel stations.

The series is available for purchase on the iTunes Store, Prime Video, and Google TV as of September 2020. The series became available to stream on Disney+ on January 1, 2020. All of the aforementioned platforms excludes the episode "Don't Leave Home Without It", most likely due to music licensing issues with the episode's use of Destiny's Child's "Independent Women".

The Proud Family, a video game based on the series, was developed by Gorilla Systems and published by Buena Vista Games for the Game Boy Advance. The game was released in North America in November 2005, a few months after the show ended. In the game, Penny works a variety of jobs to raise money so she can afford to buy her parents a T.H.A.N.G. (Total Home Automated Necessity Gizmo) for their upcoming wedding anniversary. Each job plays out as a minigame. Aside from Penny and her parents, other characters from the series also appear in the game, including Penny's friends and Suga Mama. GameDaily and GameZone both rated the game 8 out of 10.

All content from Kiddle encyclopedia articles (including the article images and facts) can be freely used under Attribution-ShareAlike license, unless stated otherwise. Cite this article:
The Proud Family Facts for Kids. Kiddle Encyclopedia.