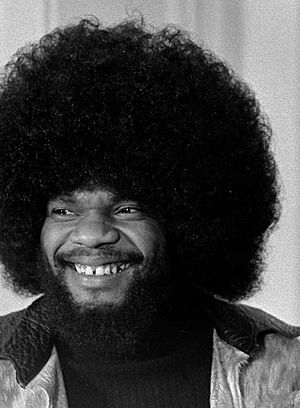 Musician Billy Preston with an Afro in 1974

Afro, sometimes abbreviated to 'fro, is a hairstyle worn naturally outward by people with lengthy or even medium length kinky hair texture (wherein it is known as a natural), or specifically styled in such a fashion by individuals with naturally curly or straight hair. The hairstyle is created by combing the hair away from the scalp, allowing the hair to extend out from the head in a large, rounded shape, much like a cloud or ball.

In people with naturally curly or straight hair, the hairstyle is instead typically created with the help of creams, gels or other solidifying liquids to hold the hair in place. Particularly popular in the African-American community of the late 1960s and early 1970s, the hairstyle is often shaped and maintained with the assistance of a wide-toothed comb known as an Afro pick.

The word "Afro" is derived from the term "Afro-American".

All content from Kiddle encyclopedia articles (including the article images and facts) can be freely used under Attribution-ShareAlike license, unless stated otherwise. Cite this article:
Afro Facts for Kids. Kiddle Encyclopedia.