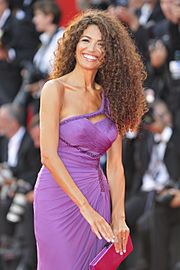 A hairstyle is the way hair is cut and styled. A haircut may be just practical, but a hairdo suggests professional styling. The fashioning of hair is an aspect of fashion, and cosmetics, especially for females. Practical, cultural, and popular considerations also influence hairstyles.

People in many cultures cut their hair, rather than letting it grow naturally. Hair styles are often used to signal cultural, social, and ethnic identity and can be used to show social status or get attention. Generally, hairstyles are influenced by gender. Women's styles are different from men's. Fashion trends may have a great influence depending on the person.

There is a great variety of hairstyles. This can best be explained by examples:

All content from Kiddle encyclopedia articles (including the article images and facts) can be freely used under Attribution-ShareAlike license, unless stated otherwise. Cite this article:
Hairstyle Facts for Kids. Kiddle Encyclopedia.