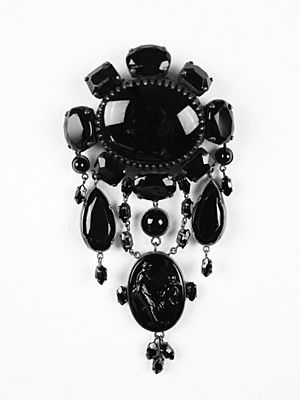 Jet is a type of lignite, a precursor to coal, and is a gemstone. Jet is not a mineral, but rather a mineraloid. It has an organic origin, being derived from decaying wood under extreme pressure.

The English noun "jet" derives from the French word (modern French "jais") for the same material: jaiet. Jet is either black or dark brown, but may contain pyrite inclusions, which are of brassy colour and metallic lustre. The adjective "jet-black", meaning as dark a black as possible, derives from this material.

Jet is also found in Poland and Santiago de Compostela in northern Spain, and near Erzurum in Turkey, where it is used to make prayer beads.

Jet has been used in Britain since the Neolithic period, but the earliest known object is a 10,000 BC model of a botfly larva, from Baden-Württemberg, Germany. It continued in use in Britain through the Bronze Age where it was used for necklace beads.

During the Iron Age jet went out of fashion until the early-3rd century AD in Roman Britain. The end of Roman Britain marked the end of jet's ancient popularity, despite use in the Anglo-Saxon and Viking periods and the later Medieval period. Jet regained popularity during the Victorian era.

All content from Kiddle encyclopedia articles (including the article images and facts) can be freely used under Attribution-ShareAlike license, unless stated otherwise. Cite this article:
Jet (lignite) Facts for Kids. Kiddle Encyclopedia.