Cedric the Entertainer facts for kids 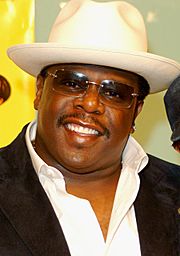 Cedric Antonio Kyles (born April 24, 1964) is an American movie, television, stage, voice actor, entertainer, and comedian who is known for his roles in The Original Kings of Comedy, The Steve Harvey Show, Larry Crowne, Barbershop, Johnson Family Vacation, Madagascar, Madagascar: Escape 2 Africa, Madagascar 3: Europe's Most Wanted and in Why Him?.

Cedric was born on April 24, 1964 in Jefferson City, Missouri. He has been married to Lorna Wells since 1999. He has two children and a step-daughter.

In September 2013, Cedric became the new host of the syndicated game show Who Wants to Be a Millionaire. He took over for Meredith Vieira, who has hosted the show since 2002. He left the show after one season of hosting due to his busy schedule, he was replaced by Terry Crews in September 2014.

All content from Kiddle encyclopedia articles (including the article images and facts) can be freely used under Attribution-ShareAlike license, unless stated otherwise. Cite this article:
Cedric the Entertainer Facts for Kids. Kiddle Encyclopedia.