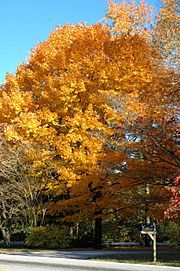 Maple sugar is a traditional sweetener in Canada and the northeastern United States, prepared from the sap of the maple tree ("maple sap"). 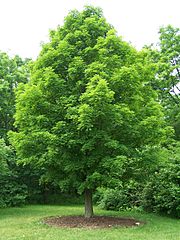 Three species of maple trees in the genus Acer are predominantly used to produce maple sugar: the sugar maple (A. saccharum), the black maple (A. nigrum), and the red maple (A. rubrum), because of the high sugar content (roughly two to five percent) in the sap of these species. The black maple is included as a subspecies or variety in a more broadly viewed concept of A. saccharum, the sugar maple, by some botanists. Of these, the red maple has a shorter season because it buds earlier than sugar and black maples, which alters the flavor of the sap.

A few other species of maple are also sometimes used as sources of sap for producing maple sugar, including the box elder (or Manitoba maple, A. negundo), the silver maple (A. saccharinum), and the bigleaf maple (A. macrophyllum). Similar sugars may also be produced from birch or palm trees, among other sources.

Maple sugar is what remains after the sap of the sugar maple is boiled for longer than is needed to create maple syrup or maple taffy. Once almost all the water has been boiled off, all that is left is a solid sugar. By composition, this sugar is about 90% sucrose, the remainder consisting of variable amounts of glucose and fructose. This is usually sold in pressed blocks or as a translucent candy. It is difficult to create as the sugar easily burns and thus requires considerable skill.

In Canada, maple sugar is one of several maple products manufactured from maple sap or maple syrup, including maple butter and maple taffy. Under the Food and Drugs Act and Consumer Packaging and Labelling Act, Canadian regulations require that maple sugar products identify the business identity and country of origin on the retail product label.

Maple sugar was the preferred form of sugar by First Nations/American Indian peoples as the sugar could easily be transported and lasted a long time. It is called ziinzibaakwad by the Anishinaabeg. Blessing of the Bay, the second ocean-going merchant ship built in the English colonies, carried maple sugar from the Massachusetts Bay Colony to New Amsterdam as early as 1631. French awareness of the process is indicated in at least one engraver's works, those of the mid-18th-century artist Jean-Francois Turpin, the engraver Bernard (including several for Diderot's 1755 Encyclopedie.) and others.

Maple sugar is used to flavor maple products and as an alternative to cane sugar.

All content from Kiddle encyclopedia articles (including the article images and facts) can be freely used under Attribution-ShareAlike license, unless stated otherwise. Cite this article:
Maple sugar Facts for Kids. Kiddle Encyclopedia.