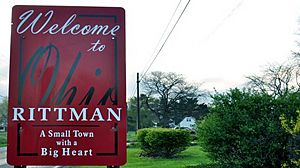 Rittman is a city in Medina and Wayne counties in the U.S. state of Ohio. All but a small portion of the city is in Wayne County, within commuting distance of Akron, Canton and Cleveland. The population was 6,491 at the 2010 census.

The first settlers in what now is Rittman were William Doyle and John Coleman, who took title to land on July 23, 1814. Records indicate that eight families purchased land in the northeastern part of newly formed Wayne County within a month of their neighbors. These families sold portions of their land to others, and within a year other families were clearing trees, planting crops and beginning the history of Rittman.

William Doyle first settled the Rittman area in 1815, through a presidential land grant. Martin and Sarah Fritz and their infant son, Adam, were other early settlers. Sarah Fritz and Adam were the first settlers to be buried in the Rittman Cemetery. Land for the cemetery had been donated by Doyle, and a school and non-denominational church were built nearby. Another church, built close to the cemetery, acquired the name of Knupp's Old Church (because the road to it ran across Jacob Knupp's farm). The restored church, located off DeCourcey Road, still stands today; it is maintained by the Rittman Historical Society.

Rittman was named after Fred Rittman, the treasurer of the Baltimore and Ohio Railroad, which ran a line through town in 1871. The town's previous name, "Arkona," had to be changed because of its similarity to Akron. Other early names of the town included Ellio, Milton Station and New Prospect.

Rittman's early economy was bolstered by grist mills, tile-making, wagon-building and tobacco farming. Businesses grew up around newly built train stations, and two factories became major employers in the area. The heart of the business community gradually moved north to the present square area. Shortly after the Civil War, the southern section of what is now Rittman - then called Milton Station - became a stop of the Atlantic and Great Western Railroad, which later became the Erie Railroad. The Lake Shore and Tuscarawas Railroad, later the B & O Railroad, opened a station in 1888, but the station had no name. After several names failed to become popular, the railroad named the stop after its treasurer, Frederick B. Rittman. That name was gradually accepted by local residents and eventually became the town's name. 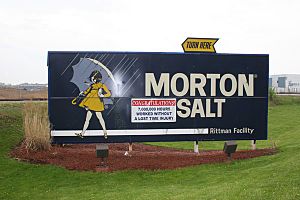 The discovery of salt deposits in Rittman in 1897 led to the founding of Wayne Salt, which later became Ohio Salt. In 1948, Ohio Salt became Morton Salt - today one of Rittman's major employers. E.J. Young, who started the salt company, needed a way to package both his salt and his matches, which were made in nearby Wadsworth. Young formed the Ohio Boxboard Co. in 1903. That company became a major employer also, bringing to town many new employees and helping business grow. Ohio Boxboard was acquired by Packaging Corporation of America (PCA) in 1965, then Rittman Paperboard, boasting of over 1200 employees in its prime. Rittman Paperboard closed its doors in early 2006.

Rittman is served by a branch of the Wayne County Public Library.

All content from Kiddle encyclopedia articles (including the article images and facts) can be freely used under Attribution-ShareAlike license, unless stated otherwise. Cite this article:
Rittman, Ohio Facts for Kids. Kiddle Encyclopedia.