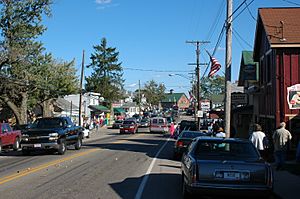 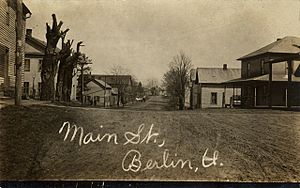 Berlin is a census-designated place located in central Berlin Township, Holmes County, Ohio, United States. It is situated at the junction of U.S. Route 62 and State Route 39.

The village of Berlin - the oldest existing village in Holmes County - was first planned on July 2, 1816, by John Swigert, a native of Berlin, Germany. Swigert's plan provided for 108 lots to be arrayed along two streets, one north-south and the other, east-west. Another early settler, Joseph Troyer, hailed from Berlin, Pennsylvania and together Swigert and Troyer bestowed upon the new settlement the shared name of their respective home towns. Berlin is located at a high point in Holmes County and local legend holds that Swigert chose the site because, thus situated, the town could be more readily defended against Indian attack.

Most early settlers of the Berlin area were of German or Swiss ancestry and came to Ohio via Pennsylvania.

In 1818, a school was established in Berlin and in 1822 a post office. These were soon followed by Methodist, Presbyterian, Baptist and Mennonite churches. Later, Amish settlers began to arrive. Berlin enjoyed commercial and industrial growth, and during the 19th century was home to machine shops, a foundry, blacksmith shops, a hat factory, hotels, an auction house and a variety of retail establishments. Berlin was described in 1833 as having 21 residential houses, two stores, two taverns and a physician.

Today, Berlin is in the heart of Ohio's largest Amish community. Ohio has about 56,000 Amish residents, an increase of 60 percent since 1992.

All content from Kiddle encyclopedia articles (including the article images and facts) can be freely used under Attribution-ShareAlike license, unless stated otherwise. Cite this article:
Berlin, Holmes County, Ohio Facts for Kids. Kiddle Encyclopedia.