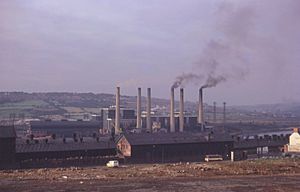 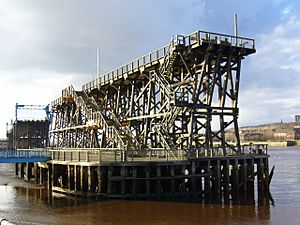 Dunston is the most Westerly part of the town of Gateshead on the south bank of the River Tyne, in the Metropolitan Borough of Gateshead, United Kingdom (into which it was absorbed in 1974). Dunston had a population of 18,326 at the 2011 Census.

Dunston is served by Dunston railway station, on the Tyne Valley Line.

Dunston is now split into two distinct areas separated by the well known A1 dual carriageway, which runs through Dunston, and provides transport links to almost anywhere. Much of the area south of the A1 is known as Dunston Hill.

To the west of Dunston is the site of Dunston Power Station, now demolished. The site is now home to Costco, with the MetroCentre (the largest shopping and leisure complex in Europe), occupying the former site of the station's ash ponds. The huge Gateshead based Go-Ahead Group, have constructed a new bus depot to replace their Sunderland Road and Winlaton depots on the eastern part of the power station site. Another Dunston landmark was the Derwent Tower, (commonly known as the "Dunston Rocket"), a tower block that was once the highest building in Gateshead. It was designed by the Owen Luder Partnership and completed in 1973. A somewhat infamous structure, that had appeared in two films, it was finally demolished in 2012. Having always proved unpopular with residents, and fallen into such a poor condition, (although without the many social problems that came to be associated with such developments), Gateshead Council decided that the renovation costs would be prohibitive. As of 2016, the remainder of the late 1960s Tower Court development is being gradually replaced by new housing and shops. Luder also designed the similarly maligned Trinity Centre Multi-Storey Car Park, (known for its 'starring role' in the 1971 gangster thriller Get Carter, and now demolished), in Gateshead town centre.

On 6 June 1993 the IRA attacked a gas holder in the nearby area of Low Team. The damage was limited, and no one was injured.

Dunston Staiths and the 1990 Garden Festival

Dunston is particularly known for wooden coal staiths, first opened in 1893 as a structure for loading coal from the North Durham coalfield onto ships. In the 1920s, 140,000 tons of coal per week were loaded from the staiths, and they continued to be used until the 1970s. They were also a shipping point for coke produced at the nearby Norwood Coke Works, as well as pencil pitch manufactured at the Thomas Ness Tar Works using by-products from the Norwood plant and the Redheugh Gasworks. Throughout their working life, motive power for shunting wagons on the staiths and in their extensive sidings known as the Norwood Coal Yard came in the form of locomotives from Gateshead MPD. The staiths' output gradually declined with the contraction of the coal industry, and they were finally closed and partially dismantled in 1980. Now redundant, the railway lines leading to the staiths were lifted, finally allowing the demolition of several low bridges that had become a nuisance to bus operators by limiting the routes available to double-deckers in the area. For many years, the men who worked on the staiths, known as teemers (the men who released the coal from the wagons and operated the loading chutes and conveyors) and trimmers (who had the dangerous job of ensuring the stability of the colliers by levelling the load in their holds as they were filled), had their own room in the nearby Dunston Excelsior Club. For anyone not employed in the club or on the staiths, access to the room was strictly by invite only, and the staithesmen held a reputation for unceremoniously ejecting anyone who fell foul of this rule. 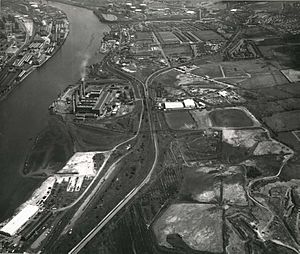 The staiths was restored and opened to the public as part of the Gateshead Garden Festival in 1990, following similar events in Liverpool (1984), Stoke-on-Trent (1986) and Glasgow (1988). The Garden Festival was divided into five zones, Norwood, Eslington, The Boulevard, Dunston and Riverside. It was spread over a large area of Dunston and the lower Team Valley, formerly occupied by heavy industries. Though other parts of the Garden Festival site, such as Dunston, (the site of the Norwood Coal Yard), Eslington, (the site of the tar works), and Norwood, (the site of the coke ovens) in the Team Valley, gained an immediate spur for regeneration, The Boulevard was left as a green space. Riverside, which was centred around the staiths and the site of the former gasworks, was derelict and inaccessible for the remainder of the 1990s, although parts of the site have now been developed into new housing.

Today, the staiths are reputed to be the largest wooden structure in Europe, and are protected as a Listed Building and a Scheduled Ancient Monument.

In 2002, work began on a development of riverside apartments and houses designed by Wayne Hemingway. Known as Staiths South Bank, this development celebrates the area's heritage as well as improving the setting for the historic structure. In the early hours of 20 November 2003, a section of the staiths was destroyed by fire. As a result, access onto the Staiths themselves is not possible, but the structure can be viewed from the new riverside walkway, constructed as part of the Staiths South Bank development. In 2005 Gateshead Council commissioned a study into possible options for the Staiths' restoration.

The Staiths suffered further fire damage in July 2010. Following the award of a Heritage Lottery Fund grant of almost £420,000, restoration of the structure is expected to begin in the near future.

All content from Kiddle encyclopedia articles (including the article images and facts) can be freely used under Attribution-ShareAlike license, unless stated otherwise. Cite this article:
Dunston, Tyne and Wear Facts for Kids. Kiddle Encyclopedia.