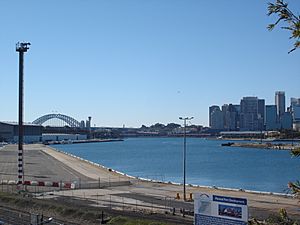 White Bay is a bay on Sydney Harbour with a surrounding locality near the suburbs of Balmain and Rozelle in the Inner West of Sydney, New South Wales, Australia. 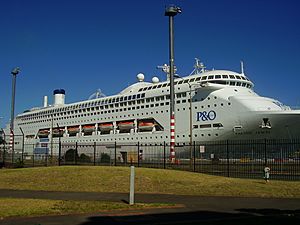 White Bay is named after John White, the naval surgeon aboard the First Fleet to Australia in 1788. Since the nineteenth century the bay has been used for water-based transport and industrial activities. In conjunction with adjacent Glebe Island it has been a multipurpose port, owned and controlled by the Government of New South Wales since 1901.

White Bay was the first port in New South Wales to handle containerised shipping, from 1969. In the 1970s there were several companies operating container terminals, with rail transfer to larger holding yards at Chullora. Container handling moved out of White Bay in late 2004, relocating to Darling Harbour. 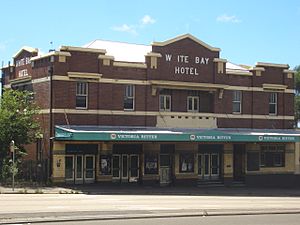 The White Bay Hotel was a historic hotel on Victoria Road. It was first built in 1861, rebuilt in 1916, and refurbished in 1925 and 1933. It finally closed in 1992, "landlocked" by roads and with no local workers. Until 2004 it served only as a platform for billboards advertising to traffic on the Western Distributor, and on 5 September 2008 was destroyed by a suspicious fire and immediately demolished. The NSW state government bought the site in June 2010.

The rubble was removed on 29 October 2010 and the block levelled.

The derelict White Bay Power Station dominates the landscape. On the eastern side stands the magnificent Anzac Bridge, which was completed in 1996 and is the main arterial link between the inner west and Sydney city. Below the bridge lies its predecessor, the Glebe Island Bridge, which opened in 1903.

For 25 years from 1971 to just before her death in 1996, one of Sydney's true characters, Beatrice Olive ("Beattie") Bush, sold papers to passing motorists at the junction of The Crescent (City West Link) and Victoria Road. Every morning in all weather, wearing Balmain Tigers socks and running shoes, Beatrice was part of the drive to work for thousands of motorists.

The 1984 song The White Bay Paper Seller by Judy Small was written about Beatrice. The 1986 painting Beatrice the Paper-Seller of the White Bay Intersection by Susan Dorothea White shows Beatrice Bush running between the cars and trucks, selling newspapers in the rain. The 2004 documentary, The Paper Queen by Julie Nebauer documented her life. In 2005 a new cycle bridge crossing Victoria Road at the intersection of The Crescent was named the Beatrice Bush Bridge in her honour. Her newspaper trolley, hat, gloves and other clothing items are held in the Powerhouse Museum collection in Sydney.

All content from Kiddle encyclopedia articles (including the article images and facts) can be freely used under Attribution-ShareAlike license, unless stated otherwise. Cite this article:
White Bay (New South Wales) Facts for Kids. Kiddle Encyclopedia.