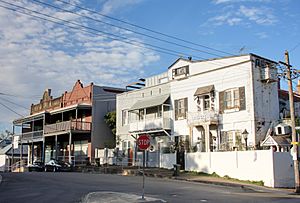 Birchgrove is located on the north-west slope of the Balmain peninsula, overlooking Sydney Harbour, and includes Yurulbin and Ballast Points. Balmain is the only adjacent suburb. The long waterfront provides views of the Parramatta River with Cockatoo Island dominating the foreground. It is one of the wealthier suburbs of Sydney thanks to its harbour frontages. In August 2010, apartments in Louisa Road were engulfed by fire. No residents were hurt, but the cause of the fire was considered suspicious.

Birchgrove was named after Birchgrove House, built by Lieutenant John Birch, paymaster of the 73rd regiment, around 1812. He added 'grove' to his surname when naming the house because of the large number of orange trees growing on the original site. The house was constructed of stone believed to have been quarried on site. 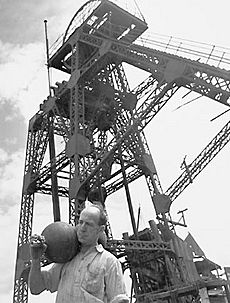 Between 1856 and 1860, Joubert instructed William Brownrigg to survey the first subdivision of ten lots. Streets were named after the Joubert family. Birchgrove House was sold to Jacob Levi Montefiore during the subdivision. Sale of the allotments fell well short of expectations with three lots remaining unsold by 1866. By December 1862, Joubert was forced to surrender his remaining interest to the Bank of New South Wales.

From the 1860s, a number of waterfront businesses appeared in the area including coopers, boat builders and the Morrison & Sinclair shipyard.

By 1878, due to market pressure from prices in nearby Balmain estate, 82 lots of the original subdivision remained unsold. Additional land was carved from the Birchgrove House when it was sold to John Lowry Adams in 1878. A syndicate of businessmen purchased the remaining lots of the estate and commissioned architect Ferdinand Reuss to draw up a new plan for subdivision. This second subdivision was much more successful with all lots sold within several years.

The local heritage item is Clifton Villa, a three-storey sandstone house in the Gothic style. The house was built in the late 1860s and is surrounded by a covered verandah. In the mid-1870s a ballroom was added. The house's interior features a marble fireplace and cedar woodwork, while the exterior includes a caretaker's cottage that was originally a carriage house. Clifton Villa is now listed on the Register of the National Estate.

The suburb was the location of the Balmain Colliery, Australia's deepest coal mine.

Tram services branched off from the main line on Darling Street, Balmain, turning left into Rowntree Street, left into Cameron Street and right into Grove Street, before terminating at Wharf Road in Birchgrove. A government bus service now follows the former tram route 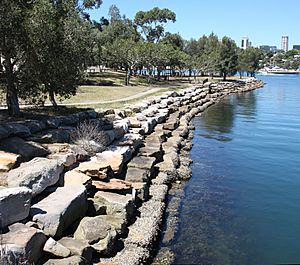 Sydney Buses operates a service from Birchgrove Park to Art Gallery of NSW via the Queen Victoria Building (QVB). During peak hours and in the evening, this service terminates at QVB

Birchgrove is home to the Balmain Sailing Club, which hosts the annual Balmain Regatta, claimed to be the oldest regatta in Australia, run for the first time in 1849. 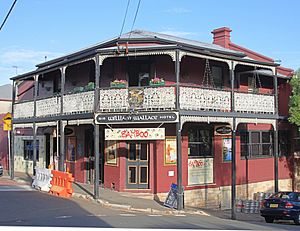 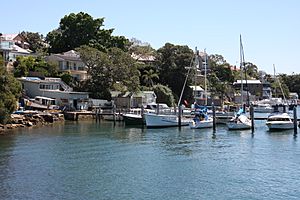 Birchgrove's population is typically wealthy, with a median weekly household income of $2,726, compared with $1,234 in Australia. The most common types of occupation for employed persons were Professionals 45.5%, Managers 24.4%, and Clerical and Administrative Workers 11.5%. 68.5% of the suburb's occupied private dwellings were family households, 25.4% were lone person households and 6.2% were group households.

Birchgrove has the highest proportion (17%) of citizens holding a postgraduate degree of any Sydney suburb.

All content from Kiddle encyclopedia articles (including the article images and facts) can be freely used under Attribution-ShareAlike license, unless stated otherwise. Cite this article:
Birchgrove, New South Wales Facts for Kids. Kiddle Encyclopedia.