Kids Encyclopedia Facts
Not to be confused with Miller's Point, Western Cape.

Millers Point is an inner-city suburb of Sydney, in the state of New South Wales, Australia. It is on the north-western edge of the Sydney central business district, adjacent to The Rocks and is part of the local government area of the City of Sydney.

Millers Point lies on the southern shore of Sydney Harbour, beside Darling Harbour. The Barangaroo development is taking place on 22 hectares of land on the western side of the suburb. Sections of Millers Point have been included as part of The Rocks area in the past and some residents and businesses still use it in their address.

On 30 June 1814 Thomas Miller, a Sergeant in the 73rd Regiment of Foot, received a grant of land from the governor. A small mill that was owned by Jack Leighton was located here. The area became known as Jack, the Miller's Point. In 1833 Governor Bourke granted the Catholic Church land at Millers Point for the construction of a school house that could serve as a chapel on Sundays. The Colonial Architect, Ambrose Hallen in consultation with Bishop Ullathorne, designed the school building which was completed by May 1835. It was a one-story building constructed in sandstone with two rooms that could be opened into one. St Brigid's Millers Point is the oldest existing place of Catholic worship in Australia. The school was closed in 1992 but the church continues to be used by the local community.

The current Sydney Observatory building on Observatory Hill was completed in 1858 by English astronomer and clergyman William Scott. Also on Observatory Hill is the old Fort Street School, converted from the old Military Hospital at Fort Phillip in the 1850s. Fort Street School incorporated the first government secondary school in Australia, and after the secondary school moved out in 1975, its building has housed the National Trust of Australia; the primary school remains nearby in a separate, heritage listed, building.

Two separate pubs in the area claim to be Sydney's oldest surviving pubs, the Lord Nelson at Millers Point and the Fortune of War nearby at The Rocks. Others in the area include the Palisade and the Hero of Waterloo. 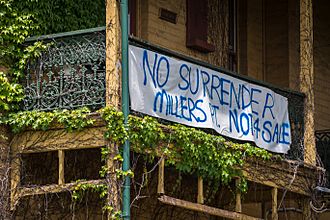 A protest movement developed from 2008 when various governments announced plans to lease and sell Millers Point, Dawes Point and The Rocks properties and move existing public housing tenants. "Save Our Community", "Friends of Millers Point" and the associated "Save Our Sirius" formed to protest relocation of residents.

Millers Point has many heritage-listed buildings, including:

All content from Kiddle encyclopedia articles (including the article images and facts) can be freely used under Attribution-ShareAlike license, unless stated otherwise. Cite this article:
Millers Point, New South Wales Facts for Kids. Kiddle Encyclopedia.