Milsons Point is a suburb on the lower North Shore of Sydney, in the state of New South Wales, Australia. The suburb is located 3 kilometres north of the Sydney central business district in the local government area of North Sydney Council.

Milsons Point is also the geographical feature that juts into Sydney Harbour from the northern side, directly opposite Sydney Cove, the spot where the first European settlement was established in 1788.

Milsons Point was named after James Milson (1783–1872), one of the earliest settlers. 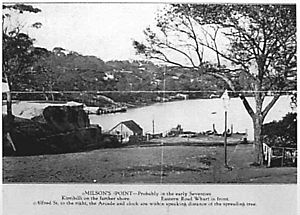 Postcard of Milsons Point. The caption reads: "Milson’s Point – Probably in the early Seventies [1870s]. Kirribilli on the farther shore. Eastern Road Wharf is front. Alfred St to the right, the Arcade and clock are within (illegible)ing distance of the spreading tree." 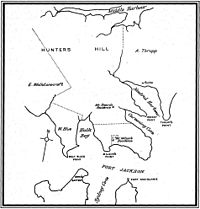 Sketch map of the Kirribilli area first published in 1955 in the book "The Life and Times of James Milson" showing approximate location of Milson's residence and that of his son-in-law William Shairp who married Milson's daughter Sophia in 1827. The perforated line marks the approximate boundary between Milson's 50 acres in the north and Campbell's 120 acres in the south.

Milsons Point was named after James Milson (1783–1872), a free settler originally from Lincolnshire.

Milson settled in the area near Milsons Point and established a profitable business supplying ships with stone ballast, fresh water, and the produce of his dairy, orchard, and vegetable gardens. 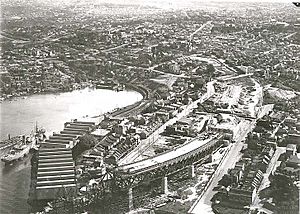 Aerial view of Milsons Point during construction of the Sydney Harbour Bridge.

The last of the family's holdings in the lower North Shore area were resumed in the early 1920s for the construction of the Harbour Bridge and associated roadways. 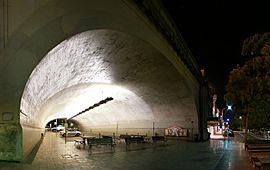 Milsons Point supports the northern end of the Sydney Harbour Bridge. Milsons Point is well connected with the CBD of Sydney by the bridge, ferries and trains. The Warringah Freeway provides a link south to the Sydney CBD and north to Chatswood.

Milsons Point railway station is on the northern approach to the Sydney Harbour Bridge. The Milsons Point ferry wharf, serviced by the Balmain, Pyrmont Bay and Rydalmere ferry lines, is located to the west of the bridge in the south-west part of the suburb. In addition to rail services, Milson's Point is serviced by buses that run to the Lower North Shore and Northern Beaches. School Buses leave from Bradfield Park to transport students to schools in North Sydney.

All content from Kiddle encyclopedia articles (including the article images and facts) can be freely used under Attribution-ShareAlike license, unless stated otherwise. Cite this article:
Milsons Point, New South Wales Facts for Kids. Kiddle Encyclopedia.