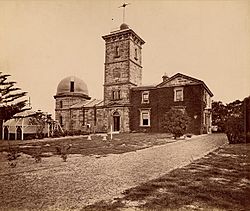 The observatory photographed in 1874 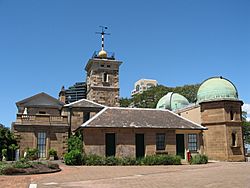 Sydney Observatory is located on a hill now known as Observatory Hill in the centre of Sydney. The site evolved from a fort built on 'Windmill Hill' in the early 19th century to an astronomical observatory during the nineteenth century. It is now a working museum where evening visitors can observe the stars and planets through a modern 40 cm Schmidt-Cassegrain telescope and a historic 29 cm refractor telescope built in 1874, the oldest telescope in Australia in regular use.

Early use of the site

In 1797, early on during the European settlement of New South Wales, Australia, a windmill was built on the hill above the first settlement. Within ten years the windmill had deteriorated to the point of being useless; the canvas sails were stolen, a storm damaged the machinery, and already by 1800 the foundations were giving way. The name of Millers Point remembers this early land use.

In 1803, Fort Philip was built on the site under the direction of Governor Hunter to defend the new settlement against a possible attack by the French and also from rebellious convicts. The fort was never required to be used for any such purposes. In 1825 the eastern wall of the fort was converted to a signal station. Flags were used to send messages to ships in the harbour and to the signal station on the South Head of the harbour. 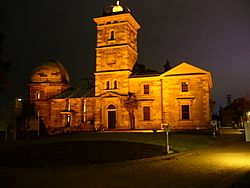 In 1848, a new signal station was built by the Colonial Architect, Mortimer Lewis, on top of the fort wall on Windmill Hill. At the instigation of the Governor, Sir William Denison, it was agreed seven years later to build a full observatory next to the signal station. The first Government Astronomer, William Scott, was appointed in 1856, and work on the new observatory was completed in 1858.

The most important role of the observatory was to provide time through the time-ball tower. Every day at exactly 1.00 pm, the time-ball on top of the tower would drop to signal the correct time to the city and harbour below. At the same time a cannon on Dawes Point was fired, later the cannon was moved to Fort Denison. The first time-ball was dropped at noon on 5 June 1858. Soon after the drop was rescheduled to one o'clock. The time-ball is still dropped daily at 1pm using the original mechanism, but with the aid of an electric motor, not as in the early days when the ball was raised manually.

The observatory is a sandstone building in the Italianate style. There are two telescope domes on octagonal bases and a four-storey tower for the time-ball. The 1858 building designed by the Colonial Architect, Alexander Dawson, comprised a dome to house the equatorial telescope, a room with long, narrow windows for the transit telescope, an office for calculations, and a residence for the astronomer. A western wing was added in 1877 with office and library space and a second dome for another telescope. Some of the first astronomical photographs of the southern sky were taken at the observatory, under the direction of Henry Chamberlain Russell. The observatory also took part in the compilation of the first atlas of the whole sky, The astrographic catalogue. The part completed at Sydney took over 70 years, from 1899 to 1971, and filled 53 volumes.

After the federation of Australia in 1901, meteorology became a function for the Commonwealth Government from 1908, while the observatory continued its astronomical role. The observatory continued to contribute observations to The astrographic catalogue, kept time and provided information to the public. For example, each day the Observatory supplied Sydney newspapers with the rising and setting times of the sun, moon and planets. A proposal to close the observatory in 1926 was narrowly avoided, but, by the mid-1970s, the increasing problems of air pollution and city light made work at the observatory more and more difficult. In 1982, the NSW Government decided that Sydney Observatory was to be converted into a museum of astronomy and related fields as part of what is now the Powerhouse Museum.

All content from Kiddle encyclopedia articles (including the article images and facts) can be freely used under Attribution-ShareAlike license, unless stated otherwise. Cite this article:
Sydney Observatory Facts for Kids. Kiddle Encyclopedia.