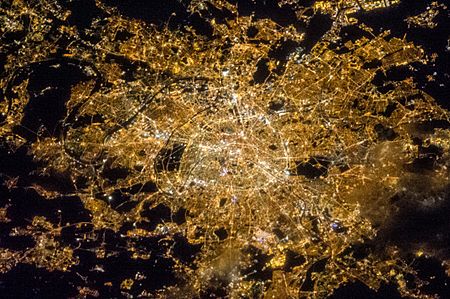 Light pollution is a type of pollution. It is defined as “any adverse (or bad) effect as a result of man-made lights.” Usually, this means too much light. Several species, including plants and humans, are badly affected by light pollution. Most people have never heard of light pollution, and those who have usually don’t care, or do anything about it. Light pollution costs Americans billions of dollars every year. 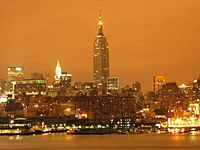 There are five kinds of light pollution:

Sky glow usually has more of an effect on the environment than light trespass and glare, but all of them are a major problem to people today.

Sky glow is the kind of light pollution that prevents people from seeing stars and other deep-space objects. This causes birds to not be able to migrate to the right place because they can not follow the moon and stars. Sky glow also prevents astronomers from seeing dim objects.

The third kind of light pollution, glare has different kinds. The first, disability glare, is the loss of visibility because of too many lights. Discomfort glare is when the lights cause pain.

Light pollution stops migrating birds of having any way of seeing the moon and stars,they need to use to nagivate the direciton of their migration,therefore not being able to migrate to the correct place. Also, sea turtles do not come to shore and nest as often, because they are afraid of the lights.It also affects animals eyes as a flash of camera weakens the eyesight of animals.

Glare causes sleep problems in humans. Too much light in an apartment shining in from a nearby billboard will disturb their sleep. Also science is being affected by light pollution. Astronomers have no way of observing, or making discoveries with too much light to block the night sky. It also causes headache as when light directly falls into our eyes and affects the sensory nerves.

There are now several groups that are trying to prevent light pollution. Light pollution first made news in 1964, when an observatory was specially placed just to avoid light pollution. However, it wasn’t brought to the attention of most people until June 6, 2002, when the Czech Republic passed the world’s first light pollution law. Since then, light pollution is slowly being recognized by the general public as a major problem.

You can lower the amount of light pollution by having lights off when they are not needed. You can also shield yourself from this pollution by putting curtains on a window facing the street or any other disturbing light source.

All content from Kiddle encyclopedia articles (including the article images and facts) can be freely used under Attribution-ShareAlike license, unless stated otherwise. Cite this article:
Light pollution Facts for Kids. Kiddle Encyclopedia.