Glebe is an inner-western suburb of Sydney. Glebe is located 3 km south-west of the Sydney central business district and is part of the local government area of the City of Sydney, in the Inner West region.

Glebe is surrounded by Blackwattle Bay and Rozelle Bay, inlets of Sydney Harbour, in the north. The suburb of Ultimo lies to the east and the suburbs of Annandale and Forest Lodge lie to the west. The southern boundary is formed by Parramatta Road and Broadway. Broadway is a locality sited along the road of the same name, which is located on the border of Glebe, Chippendale and Ultimo.

Glebe's name is derived from the fact that the land on which it was developed was a glebe, originally owned by the Anglican Church. 'The Glebe' was a land grant of 400 acres (1.6 km2) given by Governor Arthur Phillip to Reverend Richard Johnson, Chaplain of the First Fleet, in 1790. 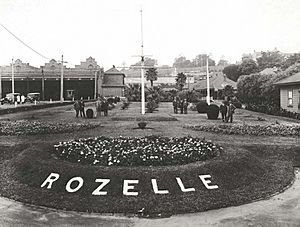 In the 19th century, Glebe was home to architect, Edmund Blacket, who had migrated from England. Blacket built his family home, Bidura, on Glebe Point Road in 1858, designing it along conventional Victorian Regency lines. He also designed St John's Church, on the corner of Glebe Point Road and St Johns Road. The church was built from 1868 to 1870.

The Rozelle Tram Depot, opened for service on 17 April 1904. The depot served the inner western suburbs tram routes to Leichhardt, Balmain, Birchgrove, Abbotsford, and Lilyfield. During its peak of operations the depot was a major place of employment, employing up to 650 staff and was one of few workplaces of significant size in the Glebe area during its period. The depot ceased operations on 22 November 1958.

The suburb of Glebe was home to a first grade football team in the New South Wales Rugby League, now the National Rugby League. The Glebe Dirty Reds were formed in 1908 and played in the first seasons of rugby league in Australia, with home games at Wentworth Park. The foundation club did not win a premiership, and was excluded from the competition in 1930.

In the 1970s, feminist activists took over an abandoned terrace house and set up Australia's first women's shelter, the Elsie Refuge.

The original vegetation was the Sydney Turpentine-Ironbark Forest. A veteran Ironbark still grows at the grounds of St John's Anglican Church, at Glebe Point Road. 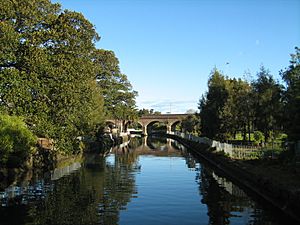 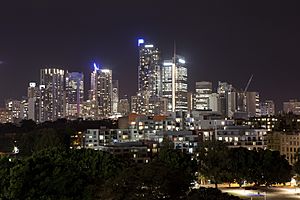 The Darling Harbour skyline at night from Glebe

At the 2011 census, there were 11,123 residents in Glebe. 32.7% of people were attending an educational institution and of these, 40.5% were enrolled in a tertiary or technical institution. Slightly more than half (57.4%) of people were born in Australia, with the top other countries of birth being England 4.9%, New Zealand 3.5%, Vietnam 2.0% and China 1.6%. Tertiary Education (6.6%) was the major industry of employment, with other major industries including Legal and Accounting Services 4.8%, and Computer System Design and Related Services 3.9%. About a third of people travelled to work by car and a similar amount of people travelled by public transport. The majority of dwellings in Glebe were either semi-detached houses or units/apartments. Only 9.1% of occupied dwellings were separate houses. Renting (61.5%) was far more common than home ownership. Just 17.6% of people in Glebe owned their home outright. 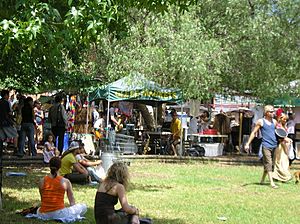 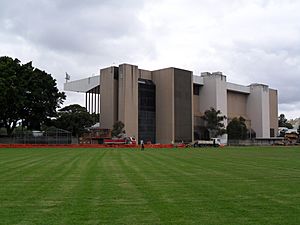 Glebe Point Road is the main road through the suburb, featuring a shopping strip, known for its specialty shops and cafés and for its variety of ethnic restaurants – Indian, Thai, Italian, Nepalese, Dutch-Indonesian, and other minority ethnic tastes.

Broadway Shopping Centre was built on the landmark site of the former Grace Brothers department store. The shopping centre includes a food court and cinema complex, and completed a renovation in July 2007 which added a fourth floor.

Glebe has a popular market which is held on Saturdays in the grounds of Glebe Primary School. Arts, crafts, clothing and edibles are sold. They are known as the alternative markets for the alternative lifestyle goods that are offered. New and second-hand goods are sold there.

Wentworth Park, which features a greyhound racing track, is on the border with Ultimo.

Glebe mini skateboarding ramp is located in Bicentennial Park off Chapman road, in between Glebe and Annandale. The mini was originally 3.5-foot (1.1 m) tall with a hump in the middle. Circa 2005 the original mini was removed and replaced with a traditional 4-foot (1.2 m) ramp, sans hump.

The Dulwich Hill Line of Sydney's light rail network has two stations in the suburb, Glebe and Jubilee Park, with the journey from Glebe to Central railway station taking just under twenty minutes. The 431 and 433 buses run regularly from Martin Place via Castlereagh Street, Broadway and Glebe Point Road, terminating at Glebe Point and Balmain respectively. The journey time from Glebe Point Road to Town Hall on either of these services is typically between ten and twenty minutes. Glebe Point Road is also serviced by the 370 bus, which runs from Leichhardt to Coogee via Newtown, Alexandria and UNSW.

At its south-eastern end is the Glebe Estate, an area of Housing Commission properties purchased by the government of Gough Whitlam as a massive urban renewal project to provide public housing for the needy. This area has the third highest Aboriginal population in Sydney.

The following buildings have a state or federal heritage listing: 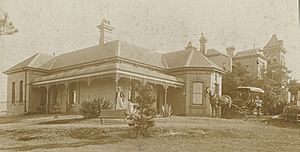 Bellevue, Glebe 1899. The large house behind is Venetia

All content from Kiddle encyclopedia articles (including the article images and facts) can be freely used under Attribution-ShareAlike license, unless stated otherwise. Cite this article:
Glebe, Sydney Facts for Kids. Kiddle Encyclopedia.