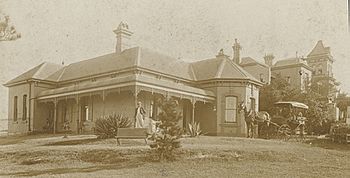 Bellevue, Glebe 1899. The large house behind adjoining is Venetia

Bellevue is a Victorian house with Italianate features in Blackwattle Park Glebe, Sydney. It is owned by the City of Sydney Council and listed by the Heritage Council of New South Wales as a property of historical significance. It was built in 1896 by Ambrose Thornley, a notable Sydney architect for William Jarrett who lived in the adjoining house called Venetia (now demolished). 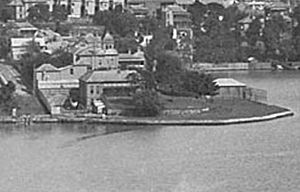 Bellevue on Blackwattle Bay foreshore circa 1900. The large house immediately behind with the tower is Venetia

William Jarrett was born in Kent, England in 1829. In 1850 he married Margaret Roberts. In 1853 they travelled on the ship Beejapore with their two infant daughters. Soon after their arrival in Sydney, Jarrett became a publican but over the next thirty years he acquired enormous amounts of land and property. His holdings are listed in an advertisement for the sale of his estate in 1902. In Glebe he owned many houses including the now Heritage listed seven adjoining residences in Glebe Point Road which encompass the houses called Favo and Gaza. In 1870 he founded the Industrial Permanent Building Society and remained as its Manager for the rest of his life. William was also an alderman for Glebe for three years. 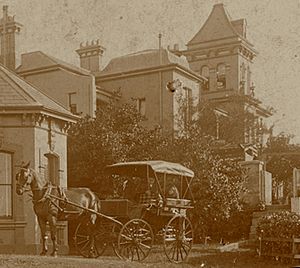 In 1873 he bought two lots on Blackwattle Bay foreshore and two years later built a very large house which he called Venetia (see photographs on right). Venetia was described in 1902 in an advertisement in the following terms.

Unfortunately William’s wife Margaret died in 1891 at their country residence called Fairlight in Mulgoa which is now also a Heritage listed property. In 1892 William remarried. His new wife was Lucy A White. In about 1896 William commissioned Ambrose Thornley, an architect to build Bellevue on the adjoining lot fronting the Bay (see photo on right). The house was described in an advertisement in the following terms.

“Bellevue is an elegant Villa on the Point. Brick, slate roof. Containing hall, 3 reception rooms, 4 bedrooms and out offices, verandahs, garden and lawns".

William rented this property from the time it was built. One of the first tenants was James George Warden who took the photograph of Bellevue shown above in 1899. William Jarrett died in 1901. His wife Lucy lived at Venetia until 1903 and then moved to another house in Glebe. 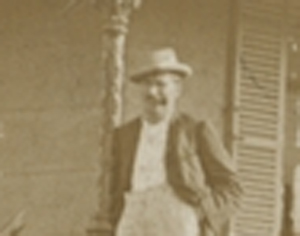 James George Warden rented Bellevue from 1898 until 1903. He was born in London in about 1860. He immigrated to Sydney in 1878 on board the ship Christiana Thompson. In 1886 he established the firm of Warden Hotel Brokers in Pitt Street. In the following year he married Mary Jane O’Dwyer. The couple had five sons and one daughter over the next 12 years. Their youngest child, William was born at Glebe in 1899.

James was a foundation member of the Royal Motor Yacht Club. He also owned the property Pine Park in Forbes. Unfortunately his wife Mary died in 1903. James remarried in 1924. His new wife was Edith H Palmer, and the couple lived at Bellevue Hill. James died in 1937 at the age of 76.

Bellevue as an industrial site

In 1913 William Archibald Windeyer, a solicitor, bought Bellevue and Venetia and shortly after demolished Venetia. After about 1925 the area around the Point at Blackwattle Bay became increasingly industrial and Bellevue became part of a timber yard for many years. By 1970 the whole foreshore was very unappealing and dirty. The newspaper “The Glebe” described it as “"a disaster area - deserted timber yards, empty fuel drums littered about, derelict houses and rusting hulks of barges moored to rotting jetties".

During the 1970s the area was rezoned as residential and in 1981 Leichhardt Council bought the foreshore parkland which included Bellevue. The park was opened in 1983 but Bellevue was left in a rather derelict state.

Blackwattle Bay foreshore circa 1900. Bellevue can be seen at far right. 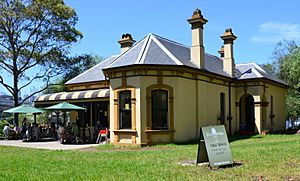 Bellevue converted to use as a cafe, 2012

In 2003 Bellevue came under the jurisdiction of the City of Sydney Council because the suburb of Glebe had been transferred to their control. In 2005, the Council commissioned a Conservation Management Plan for Bellevue, and a DA was approved for its restoration and refurbishment as part of Glebe foreshore parks upgrading. On 3 March 2007 an open day was held at Bellevue to celebrate the completion of the building's restoration. The house remains in the ownership of the City of Sydney Council. It was converted to commercial use and was being used as a cafe by 2012.

All content from Kiddle encyclopedia articles (including the article images and facts) can be freely used under Attribution-ShareAlike license, unless stated otherwise. Cite this article:
Bellevue, Glebe Facts for Kids. Kiddle Encyclopedia.