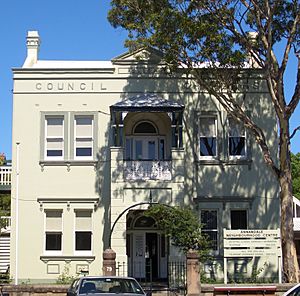 Annandale is a suburb in the Inner West of Sydney, in the state of New South Wales, Australia. Annandale is located within 5 kilometres west of the Sydney central business district and is part of the local government area of the Inner West Council. Annandale's northern end lies on Rozelle Bay, which is on Sydney Harbour. Glebe lies to its east, Lilyfield and Leichhardt to its west and Stanmore and Camperdown to its south.

Major George Johnston (1764–1823) arrived on the First Fleet ship Lady Penrhyn, which brought convicts to Australia from England. He was granted 100 acres (0.40 km2) of land in the area around Annandale and Stanmore, which became known as Johnston's Bush. He later renamed it Annandale after his birthplace Annan in Scotland, United Kingdom. His name is remembered in Johnston Street, Johnston Lane, Johnstons Creek and Johnstons Bay. Johnston and his wife Esther Abrahams, one of the convicts on the Lady Penrhyn, farmed the property with their children. They built a fine residence called Annandale House in 1799, some distance back from Parramatta Road. It was demolished in 1905, although the original gates were preserved and rebuilt on the grounds of Annandale Public school nearby on Johnston Street. George's son Robert inherited the estate, but in 1877 sold it to John Young, who was a businessman, architect and mayor.

Young began turning the Johnston estate into an attractive suburb by building a number of picturesque houses. One of those houses was Kenilworth, with a "witch's cap" style of roof common to that period of architecture, which Young rented to Henry Parkes, father of Federation and former Premier of NSW. Kenilworth was sold for $3.35 million in 2007. Other houses in the group were The Abbey, Oybin, Rozelle (now demolished), Greba, Hockingdon, Highroyd and Claremont (now demolished). Some of the houses are popularly known as "witches houses" because their towers resemble witches' hats. Highroyd was given a major restoration which took twenty years and was completed in 2009. The restoration was supervised by heritage architect David Springett and led to Highroyd being nominated for the heritage category of the Australian Institute of Architects New South Wales awards in 2009.

Of the various houses in this group, The Abbey is the most notable. Built by John Young, The Abbey has been described as a stone Gothic Revival mansion, modelled on Scottish manors. Young gave his imagination a free rein and the house incorporates gables, arches, gargoyles, lions, quatrefoils, chimneys, turrets, a cloister and a tower with copper cladding (it was rumoured that Young may have stolen gargoyles from St Mary's Cathedral, which he built, but there was no proof). Young was the highest ranking Mason in Australia and The Abbey incorporates Masonic themes. It is possible that the building may have been used by Young as a Masonic Lodge. After Young's death, The Abbey was occupied by a series of tenants, who subdivided the house to create flats and flatettes. 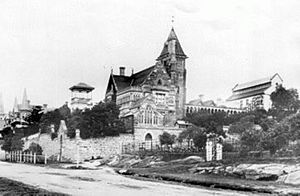 A new owner acquired the house in 1959 and restored it. It is now on the Register of the National Estate. The house itself was sold for A$4.86 million on 7 November 2009, setting a record residential price for the Annandale area. The selling agent had been hoping for a price of A$5 million, but despite a crowd of 200 people attending the on-site auction, there were only two bidders. The auction itself took nearly an hour to complete, as one bidder regularly engaged in disputes with the auctioneer over the conduct of the auction.

Another home in the area was Kentville, which was built as John Young's home, in a three-hectare garden setting adjacent to Rozelle Bay. The land was bought by Young in 1877, and included a cottage built by Robert Johnston. Young enlarged the cottage and named it Kentville after his home county in the UK. He also built a bowling green on the land and opened it to the public. Young hoped that the Annandale area would be fine enough to rival places like Darling Point, but was unable to prevent the growth of industries or the subdivision of lots. He died in 1907. The land was subdivided in the late part of the 19th century and more so after Young's death. Since then it has undergone a number of social transformations, from factory floors, migrant stop off, ageing population, to now young families and modern small and micro businesses.

Johnston Street, completed in 1888, is notable for being the first 30-metre (100 ft) wide street in Sydney 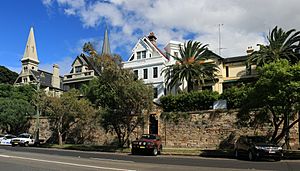 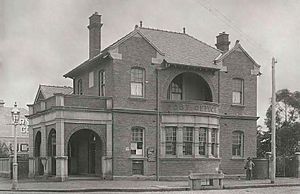 Annandale has many heritage listed buildings including 'Grant Leigh' on Johnston Street which is classified by the National Trust. The following buildings are also listed on the Register of the National Estate:

The Annandale Heritage Festival takes place each year during Australian Heritage Week in April. In 2015, the theme of the Festival is "Business as Usual".

Annandale is bound by Johnston Creek in the east and White's Creek in the West, and Sydney Harbour to the North.

The Eco-Annandale exhibition has been run annually since 2009. Each year, the group exhibition focuses on an aspect of Ecological Sustainability.

The Footprints EcoFestival is also run annually, in White's Creek Valley. The first year it was run at World Environment Day, however, a storm caused its relocation to the Leichhardt Town Hall. The festival is now held in August.

Buses are the primary mode of public transport in Annandale. The major bus corridor is along Booth St, through the middle of the suburb. This corridor is served by the 470 (operating between Lilyfield and the city) and the 370 (between Leichhardt and Coogee via St Peters). A large number of bus routes (413, 436, 438, L38, 439, L39, 440, 461, 480, 483 and M10) operate along Parramatta Rd at the southern border of the suburb. These all service the city, with the M10 continuing to Maroubra Junction. In the north east of the suburb, the 433 operates along The Crescent between the city and Balmain.

The Rozelle Bay stop on the Dulwich Hill Line of Sydney's light rail network is located in the north of the suburb. Trams operate to east to Central railway station via Pyrmont, and south-west to Dulwich Hill. 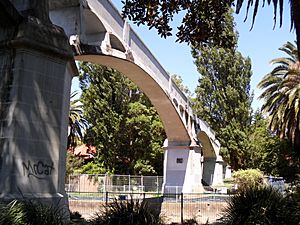 All content from Kiddle encyclopedia articles (including the article images and facts) can be freely used under Attribution-ShareAlike license, unless stated otherwise. Cite this article:
Annandale, New South Wales Facts for Kids. Kiddle Encyclopedia.